Apologies for the brief break in blogging! I’ve been having a lovely little break with some friends up in Yorkshire, where I saw the fabulous Boy George in concert and got appropriately New Romantic-ed up again, and then rushed back yesterday for the launch of Richard Lester’s book on John Bates. I will be reviewing the book after I’ve got over the giddiness at meeting my design icon again, so stay tuned! 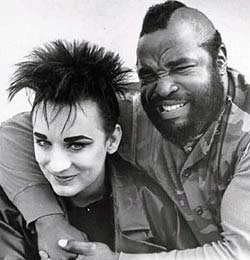 I pity the fool who doesn’t dress up and make-up for Boy George gigs!
I also visited the Lichfield retrospective at Nunnington Hall, which I can highly recommend. There’s even a photo of the delicious Oliver Reed which was a nice surprise as we went in. The infamous Jane Birkin in Ossie Clark photo was there, as well as a contact sheet from the rest of the shoot (some of which I preferred to the final definitive image).

The house is National Trust and, aside from a very bizarre and slightly uncomfortable atmosphere in the upper floors [though I did not see a ghost, unfortunately], is well worth a look around as well. The only disappointment was that they didn’t mention he had his own range of frilly shirts, sold through Annacat, in the Sixties! But that could only ever be a disappointment to someone strange like me!

Yeah Baby! Lichfield does his Austin Powers thing alongside Janet Lyle of Annacat

Oh and talking of white frilly shirts…. On a day trip to Liverpool, I officially fell in love with a completely divine white shirt in Vivienne Westwood with three enormous bow ties down the front. In my current deliriously New Romantic phase, where I often find myself gazing longingly at photos of John Taylor in a ruffly shirt [it’s hard to decide which of those two things I want more], there can be little better than an actual Westwood one. I don’t often post about modern pieces, and I still can’t find a photo to show you, but I make the exception for Vivienne because she’s the very definition of fabulous! Of course it’s a Gold Label priced at about £350, Miss Peelpants does nothing by halves, but a girl can dream can’t she?

In lieu of a photo of the Westwood shirt I want, here are some gratuitous images of John Taylor in white shirts.