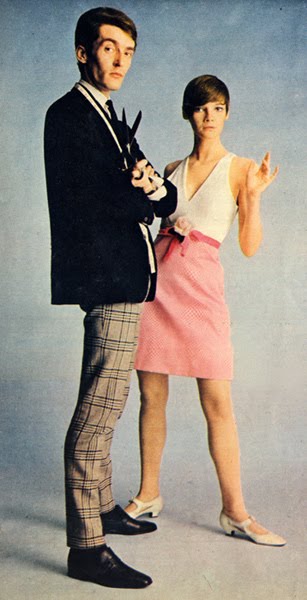 As deliciously opinionated as ever (you have to take him with a big pinch of salt, like so many male designers…), and as promised in my earlier post with the cover, Mr John Bates in Woman’s Mirror, May 1966.

“Women are funny,” he says. “They heave their breasts up and out with tight padded bras and by the time they’ve finished squeezing everything in or pushing it out, they can look quite terrifying when they take their clothes off. Bras should just lightly cup the breast and tights are better than any girdle. Even the lightest suspender belt marks the skin. It’s muscles that matter – women ought to learn to use them properly.”

John, who is 29, created fashion dynamite with his sizzling clothes for Diana Rigg in The Avengers. He believes that skirts are going to get even shorter and that everyone under 40 should be pinning up hems. He says clothes look best on slim girls, but furnishes his flat with curvaceous statues and pictures of rotund Rubenesque beauties. He makes a lot of his own clothes, thinks that hipsters suit both sexes and most sizes, and always wears them himself. He’s now designing shoes, stockings and planning his new collection as well as designing clothes for men.

“And I always design something special for my mother at Christmas. Last year she set her heart on an Avenger op art fur coat. She’s well over 60 and I said, ‘Honestly love, it won’t suit you,’ but she said, ‘What’s good enough for Diana Rigg is good enough for me.’

“Usually I don’t listen to anybody. I’ve had my years of being told what to do. Now I don’t accept advice from anybody.”

Born in Newcastle, the son of a miner, John started at the bottom. “I’m no art school protégé. I picked up pins, embroidered, did the cleaning and had every rotten job that was going flung at me. I came to London because it’s the only place to work in the rag trade. I got on the train with a Newcastle accent and when I got off at London I’d lost it. I spoke very slowly for a long time, but it’s really the only way to do it.” 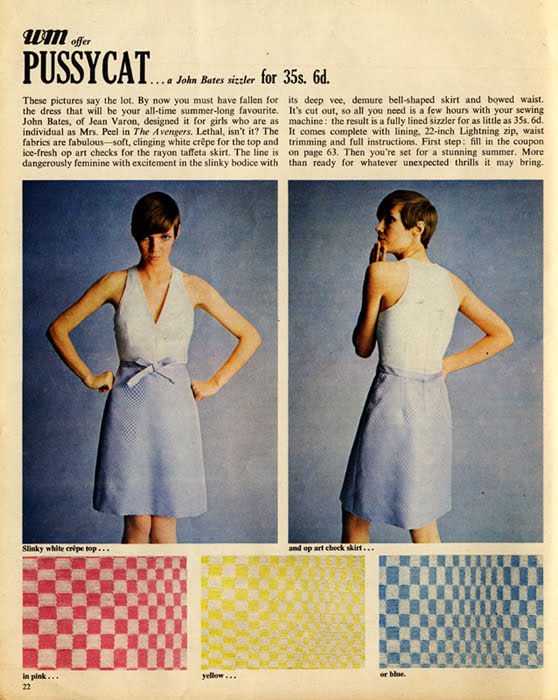 And joy! The magazine’s owner never sent off for the dress (which is sad), but this means that the form is still in tact (which is rather fabulous). Now where’s that time-travelling postbox I keep requesting? 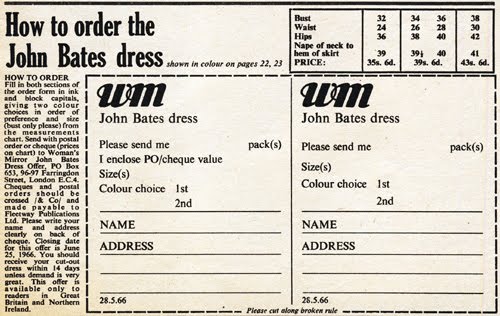