Artist and designer Alan Aldridge first discovered the charms of the female body as a canvas when he painted his wife four years ago for a book poster. Since then it has become quite a habit with him, and his model on this occasion — actress and singer Jane Birkin — was one of a growing line of his painted girls. For her, however, it was a new experience. “I had flowers painted on my face for a film in India,” she recalls, “but the heat just melted them and they cried down my face. Apart from that, the girls I’ve seen in London with their faces painted tended to look pretty sordid and sweaty. When you think of it, there’s such a lot you could do,” she said. “It would be marvellous, for instance, to have bracelets and necklaces painted on. Mind you, the actual experience of being painted takes some getting used to. The sensation of the brush is like being crawled over by a wet snail. And I never realised how much I laughed with my stomach.”

Who are the people who go in for body painting, and does it really exist? Bodies are not the easiest or the most obvious things to paint. And yet as party decoration, and a more exciting way of modelling clothes and jewellery, painted bodies seem to be definitely fashionable.

Though the recent vogue was first adopted by the hippies (where better to put your flowers than painted on your body?) the artist and designer Alan Aldridge is credited with having started the trend in London. In 1964, when he was named Art Director of Penguin Books, he designed a: publicity poster using his wife painted in bright colours as a model, with the caption: “We can’t offer you girls, but we can offer you Penguins.”

“We got a pretty fantastic response,”-says Alan Aldridge. “And then I started doing it commercially in a big way. Too much in fact. The break came when I painted a girl all over but I had to get her drunk on brandy for the occasion.”

Since then sporadic parties have featured painted bodies. Public relations director David Wynne-Morgan had the idea of launching a book, The Exhibitionist, by using cheerfully painted models. The book had a painted girl on the cover, and models at the publicity party sported the title in luminous paint across their backs. Later, guests were encouraged to join in the game, and splattered their dates with paint.

At one of his last collections fashion designer Ungaro showed his models with vivid designs painted around their eyes; and it has now become fairly common in the model world to wear a sparkling snake wound round your leg, or a flower imprinted on yourforehead. Full body painting is a more esoteric art. Jim O’Connor, a graduate of the Royal. College of Art, is one of the artists who took it up ; he recently painted a body in the new landscape style now popular for fabrics: his back view of a girl showed a house rising above a fence, and. clouds floating off behind some trees.

As usual, the advertising world has been quick to catch on. A poster for Ultra’s Bermuda colour television set shows a girl lying on her stomach, naked except for a rough map of Bermuda sketched over her back. The caption invitingly reads: “Win two weeks in Bermuda”.

Another person to use body painting was Andrew Grima, the Jermyn Street jeweller, who commissioned an Italian artist, Alberto Villar, to paint a naked model in wild colours; afterwards she was scattered with jewels. Though the result was exotic, Grima has not repeated the experirnent: “It was a bit too poppish for us; the paint did not show up the jewellery to its best advantage.”

Several London shops now cater for this new trend. Joan Price, of the Face Place, 26 Cale Street, SW3 is prepared to body paint for 2 gns. She recommends two makes of paint which are non-irritant and do not smear or stain clothes. They can be used together, and are put on with special cosmetic brushes: Colour Me Cloud 9 Body Paints, which cost 5s 6d for a 2in bottle (any four for £1), or the complete set for £2 17s 6d from Cloud 9 Cosmetics, 14 Boltons Close, Woking, Surrey. Their colours range from jade green to deep purple and glistening copper to a pearlised white, which is said to be good for highlighting. The second recommended wake is Innova-tion by Coty, who have produced four subtle see-through shades, which, though not originally intended for body wear, are very suitable for staining wide areas of skin. These cost 10s 6d and can be bought from all Coty stockists.

Next year the Face Place are bringing out a range of body stencils in a variety of patterns. Until then you can make do with Alice Pollock’s Paint Box for the face, from Quorum in the King’s Road, which comes in 12 colours at £3 19s 6d.

I was so sad to hear of the death of Alan Aldridge the other day. One of the most influential artists and illustrators of his generation, his work has always been a huge inspiration to me. There seems to be no better time to share this article from 1969, in which he is credited with starting the whole body-painting phenomenon which defined the late 1960s and shown doing his thing on the ever-lovely Jane Birkin.

Scanned by Miss Peelpants from The Telegraph Magazine, December 1969.

For designer John Astrop the prerequisite of a good body painting is that it should be “wild”. He is an old hand at the game. Privately he has painted a friend going to a fancy dress party with an “Al Capone” scar (“it lasted all evening and was pretty horrifying”) and professionally he was commissioned to paint a girl with a complete map of Bermuda for an advertisement. His next painting, he had decided, was really going to be something unusual — a front view of a nude painted on to a girl’s back. Film actress Veronica Carlson had a train to catch, however, and could only make her attractive torso available for something less ambitious. Thus the key. This did not stop her taking an informed interest in the proceedings. She had spent four years at art school and as a result her comments were soundly practical. If he was going to add any more water to the paint, for example, could it be warmed first?

After a lifetime of doodling flowers on to her arms and legs, model, singer and former “Hair” actress Marsha Hunt was able to discuss the subject of body painting with a certain amount of authority. “Of course it’s nothing new,” she said. “American Indians, Africans, every backwoods civilisation you can think of have got themselves painted up. But I don’t think you will see paintings as big as this,” she said, peering down at cartoonist Ralph Steadman’s illustration. “Who’s got three hours to spend being painted? It would have to be a pretty high party.” She broke off and proprietorially peered down at the couple recumbent on her bosom. “Are they both white?” she asked, with the tone of a scandalised landlady. At that stage they were, but Steadman quickly turned the scene into an advertisement for a mixed marriage, and honour was satisfied. “I’ve enjoyed it,” he said. “I’d like to have a go at a couple of politicians next.” 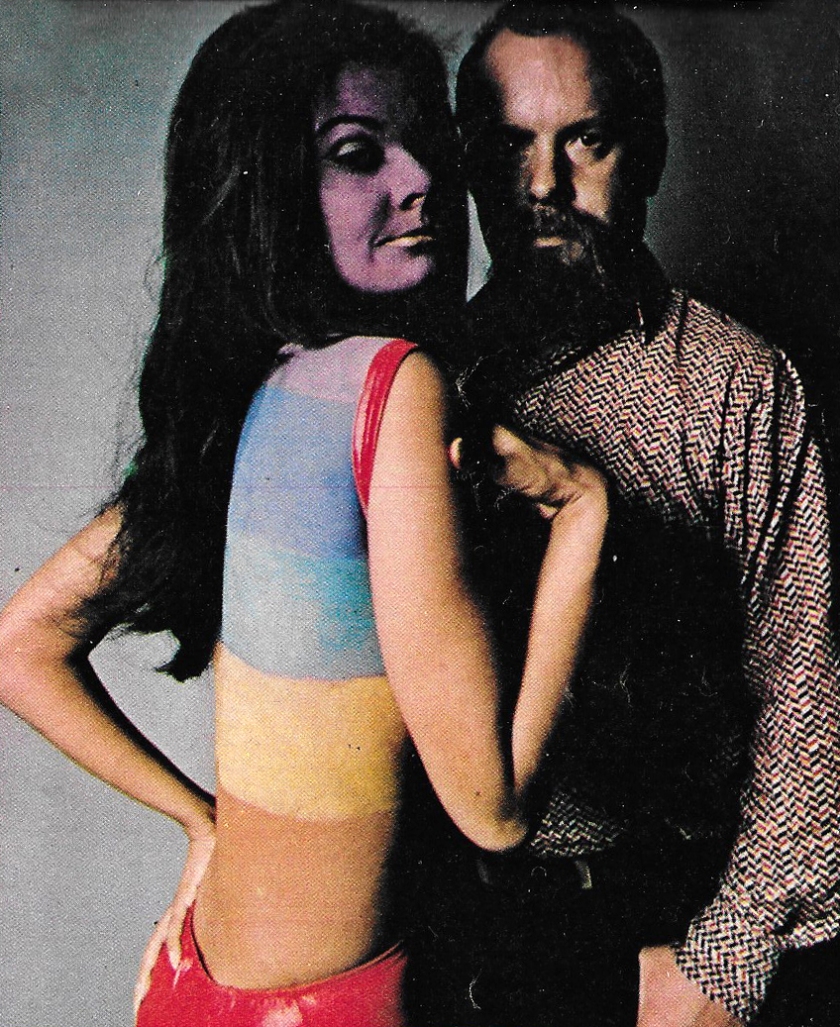 Faced with the whole of actress Imogen Hassall s back for a canvas, painter-illustrator Peter Blake opted for total decoration: He decided to daub her in.a rainbow of colours taking their cue from the red of her playsuit and ending with a purple dramatisation of herf ace. “If you are going to paint a body, why not paint as much as you can get your hands on,” he declared. Imogen, who took all this literally lying down, reserved her comment while he boldly sketched in the ribs of the pattern. “The whole idea reminds me of how women used to paint stockings on their legs in the war,” said Peter. “That sort of body painting literally was fashion, but now I see it more as an extension to fashion — marvellous for anyone who wants to attract attention.” Imogen felt the same way. “Just the thing for a premiere — really quite groovy,” she said, stepping out into the street and virtually stopping the traffic with her now dazzling striped back and red playsuit. 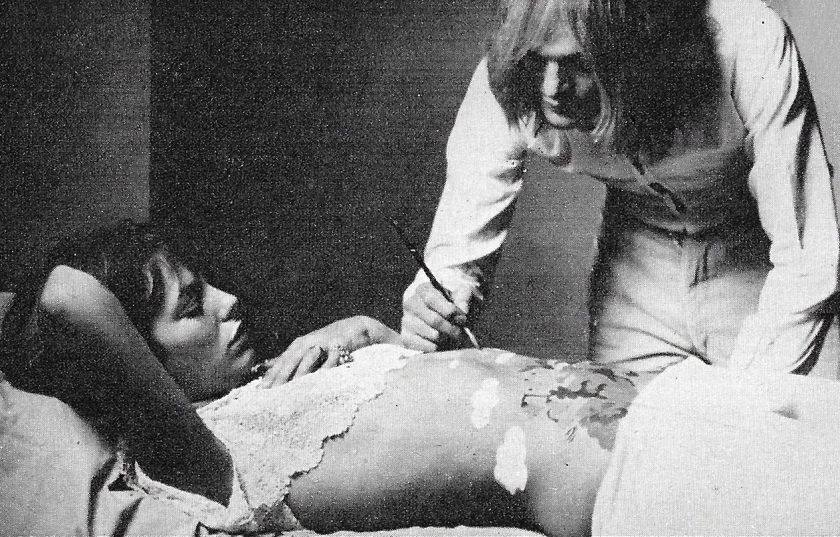