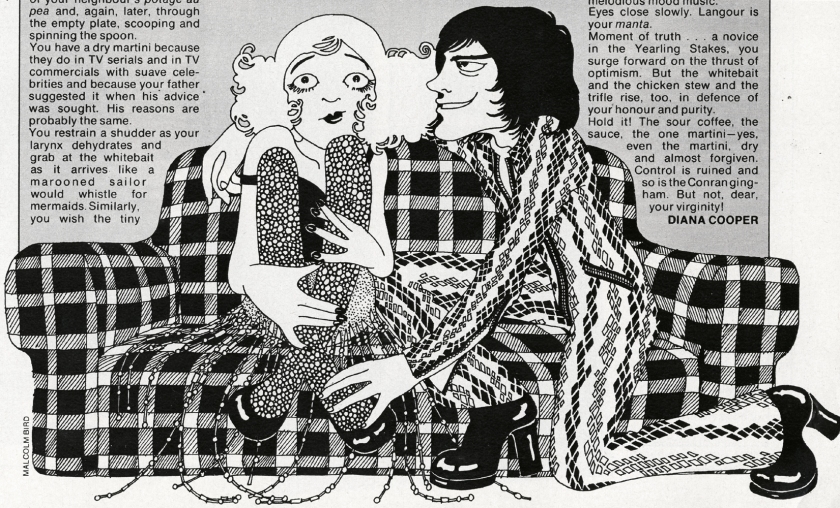 He’s twenty-five. He’s wearing boots. He has this smile that makes you think of your pony back home in Sussex. He asks you out. You’ve been in London three weeks. You’ve been to the movies alone five times. You’ve eaten thirteen tins of baked beans. You think he looks dangerous. You accept. He takes you for a meal—one they used to put on expense accounts and now write off to personal sex accounts.

He’s wearing a snakeskin suit. It has the insidious imprint of the King’s Road Own Seduction Corps. King’s regulations are strictly for the birds and you’re barely hatched. You’ve made the first move backwards by wearing a very almost-not-there dress which Mummy said was common when you were home last weekend.

His car smells of polished leather and Brut and you were warned that Devon Violets is suspect, in spite of granny-chat. It’s a cover-up for you-know-what. You murmur among the traffic lights. You park among the foreign number plates. The CD’s scream their immunity from dangerous corners, double yellow lines and fire station forecourts.

The restaurant is sadly assembled. Small and dull, you share the regulation banquet with eight others. Tables have to be shuffled every time some-one wants to move.

You trail fringes in and out of your neighbour’s potage au pea and, again, later, through the empty plate, scooping and spinning the spoon.

You have a dry martini because they do in TV serials and in TV commercials with suave celebrities and because your father suggested it when his advice was sought. His reasons are probably the same.

You restrain a shudder as your larynx dehydrates and grab at the whitebait as it arrives like a marooned sailor would whistle for mermaids. Similarly. you wish the tiny heads were less wistful, the tiny tails less anguished. But you’re absorbed in the effort to show interest in your Mate’s Progress whilst trying to clean up the soupy and fringy bits without appearing to be scratching the bottom of the bowl.

You order something that looks like Coq au Rising, because it’s one of those witty places where the menu is badly chalked on an old slate with remarks like, `sorry drakes, the duck’s night off—try our Boeuf Havitoff instead’.

Everything is going to be disguised in tomato sauce with chopped peppers to hush it up and a few mushrooms, tired of waiting, to tone it down.

The creamed spinach has bits of the label off the tin concealed in it. After guiding it on a tour of your teeth, you swallow it rather than eject it from tongue to table. The sherry trifle is reminiscent of school lunches. Mucky, spongy left-over in a thin sauce.

The coffee is aggressive. It scrapes the protesting throat. Nevertheless, sour and stewed, down it has to go, setting up a sacrificial reaction ‘from the wine, something red and spiteful, which could have been emulsion with thinners. The martini is already forgotten but not forgiven.

Your head blows off when it meets Fulham freshness.

The flat—his—is in a block where the central heating boasts with absurd exaggeration and there’s no air to need conditioning! It’s on the fourth floor. The lift is silent with warning.

You drop your coat on the hall chest, which itself has a mistletoe bough threat from its Peter Jones mock studdery. He leads you to maturity via a Conran sofa where, with all those occasional tables and two plastic poufs, romance would perish even between Heloise and Abelard.

He says you’re very lovely, aren’t you? Enigmatically you smile at him as you unhook the fringe tethering his pocket zip to your prudent bust. He adds that you’ve an untouched quality. Enigma changes to wistful nostalgia for opportunities lost and then you feel a sudden, terrifying attack of wind. Losing your virginity is one thing, the risk of losing control of digestive outlets, is quite another.

Your muscles assume a rigidity in their counter-attack, which he assumes is modesty. He murmurs softly to relax, little girl, you can trust him. Trust him for what? A tablet to bring express relief? But the moment passes. Relief prompts honesty so you admit that you are, indeed, untouched.

The wine, the warmth, the hum of collective combustion below, make soporific nonsense of energetic passion. Virginity is never its own reward, only someone else’s, but we must have something to tell Sue and all the others.

Zips slip. The silence is describable. Like heavy breathing or deep down from an eider. More compelling, much more inviting, more mysterious, more exciting than Mantovani’s melodious mood music.

Moment of truth . . . a novice in the Yearling Stakes, you surge forward on the thrust of optimism. But the whitebait and the chicken stew and the trifle rise, too, in defence of your honour and purity.

Hold it! The sour coffee, the sauce, the one martini—yes, even and the almost dry martini, forgiven. Control is ruined and so is the Conran gingham. But not, dear, your virginity!