Reflection perfection. Sunset over the Arno

I return from Florence with the tiresome evidence of my having provided a gourmet meal for the mosquitoes who reside therein. But I will save you the gory, bumpy details. I had a wonderful time with M in possibly the most beautiful city in the world (I say that as though I’ve seen all the others, but I’m just making a sweeping generalisation as ever…) and had a wonderful birthday.

We gorged ourselves on art and spiritual atmosphere more than pasta (although I managed to get a bowl of my beloved gnocchi on the last night, upon realising this mammoth error) at the Uffizi, Santa Croce and several other smaller places besides.

It’s a weird thing for me, as a hugely lapsed Catholic*, to actively want to spend time wandering around monuments to something I’ve obviously rejected as a way of life. But I always loved the bells and the smells and grew up in a family who actively sought out Latin Masses. (There’s a photo of my Grandmother meeting with the current Pope. Serious stuff people!) The atmosphere is intoxicating at times, inspirational and spiritual even if you have vastly differing ideas to those who created and decorated them.

*I sometimes think that lapsed Catholicism is a religion in itself… 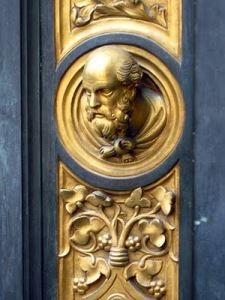 The Uffizi gave me the chance to indulge my (yes, I know, hugely mainstream. So sue me.) passion for Botticelli. It may not be everyone’s cup of tea, and even I can see that overexposure can render something like The Birth of Venus rather tedious, but there is something about that level of perfection which makes me catch my breath and my eyes well up. Not physical perfection, whatever on earth that may be, or literal perfection like, say, Ingres, but an attempt to capture the beauty of nature in the most perfect way he could. After rooms and rooms of devotional religious scenes, the more allegorical scenes of Botticelli’s best works are rendered even more extraordinary.

[I also enjoyed noting the clear inspiration Celia Birtwell took from those paintings. They look as though they’ve been dressed by Quorum.]

I maintain a healthy love for those who are brave enough to outline their subjects. I had regular confrontations with my art teacher in relation to this, he felt I should smudge every line to reflect reality. And then wanted me to write an enthusiastic essay on the merits of Picasso. Weird.

Someone else who liked to outline his subjects was De Chirico, who was the star attraction of an exhibition at the Strozzi. It was pretty incredible to see so many incredible surrealist masterpieces contained within a Florentine Palazzo, and it’s always nice to pick up a few new favourite artists along the way.

I know everyone takes the same photo, but I care not.

What with the views from the Piazzale Michelangelo, the Ponte Vecchio, the gelati, the endless beautiful streets of beautiful buildings and, finally, a sweltering train journey through the heavenly countryside of Tuscany, I have had an almost overwhelmingly lovely time.

Doctor Who viewers will know exactly why I find statues even more deliciously creepy than ever.
This one was so unbelievably beautiful; that sculpted fall of fabric down the stairs…

I note, with some resignation, that the good people of Florence do not tend to dress for dinner. Tourists are pretty useless for this too, obviously. So I took it upon myself to fly the flag for vintage for my birthday dinner at Zàzà (thanks to the gorgeous Laurakitty for the recommendation). A Polly Peck moss crepe empire line early-mini which nobody wanted when I listed it on eBay last year, I subsequently tried it on and realised it was a perfect fit, and my beloved green silk DeLiso Debs. Good rule of thumb: If you’re feeling a bit gloomy about ageing another year, wear something which is 70-odd years old. My dress was also about 45 years old, so I was doing a good job of being the youngest thing about…..er…..me.

Mmmmm. Prosecco. Hic!
Thank you all for your good wishes for my holiday and for my birthday. Back to work now, and I feel even luckier than ever that my work is something which I actually enjoy! I also note that this is my 400th post, which surely deserves another bottle of Prosecco? Si?