There’s a lot more to wearing a see-through dress than at first meets the eye. What a girl intends to show through the see-through for instance.

Ever since the see-through craze started in London, Carnaby Street artist Audrey Watson has been rushed off her feet – designing instant paint-on bras.

It’s a pretty ticklish business as 24-year-old Audrey paints her bras straight onto the customers skin. And, since she started débutantes and office girls have been flocking to the Lady Jane Boutique where she works, to bare their bosoms for a multicolour, exclusive, painted-on picture.

Audrey, who quotes her prices as: “10s. 6d. a half; from 3 to 10 guineas for a whole body,” will paint on anything from just patterns to faces, street signs or mock tattoos.

“I’ve even done a whole street scene right across, complete with red London buses,” she said.

Where do the girls wear them? “I often ask that,” says Audrey. “Most of them are going to parties although several people have been on their way to the airport. They said they were flying out that night to New York or elsewhere, and wanted to arrive in their paint-on.”

Any men? “Yes, lots,” says Audrey. “They come in for patterns to wear with see-through shirts.”

Audrey, who has tried painting with everything from greasepaint to ink, says it takes skill as most things crack on skin. She is now experimenting with Tempera, powder mixed with egg white like the Renaissance painters used, but she mainly works with Leichner and coloured inks gently powdered over. “It isn’t dangerous as not enough of the body is covered up, and it comes off with cold cream,” she says.

“It’s always a bit strange when I start on a new bust,” says Audrey, modest and quiet with long blonde hair, “but I like doing it for aesthetic reasons, though I know that basically it is just a fashion thing.”

Does Audrey herself wear a see-through?

“Certainly not,” she said. “Business apart – I’ll be pleased when the cover-up look comes back!”

The Lady Jane boutique maintained something of a reputation for shock value; see-through clothing, body paint and scantily clad models in the windows were staple gimmicks throughout the late Sixties and early Seventies. Some things never change, do they? 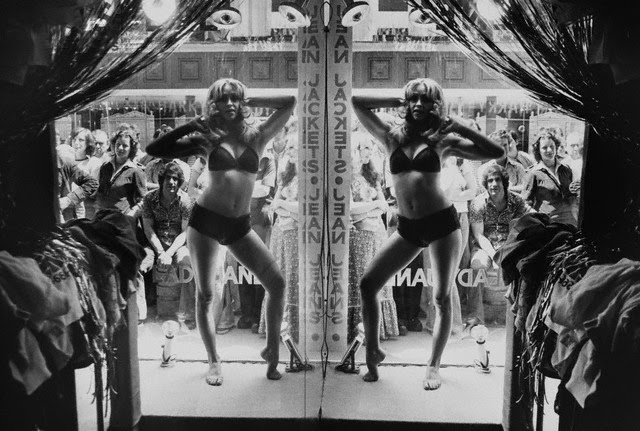 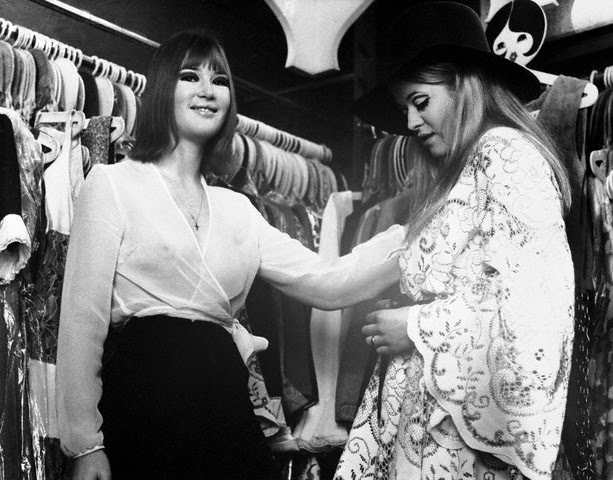 9 thoughts on “Lady Jane: The serious business of wearing a see-through”