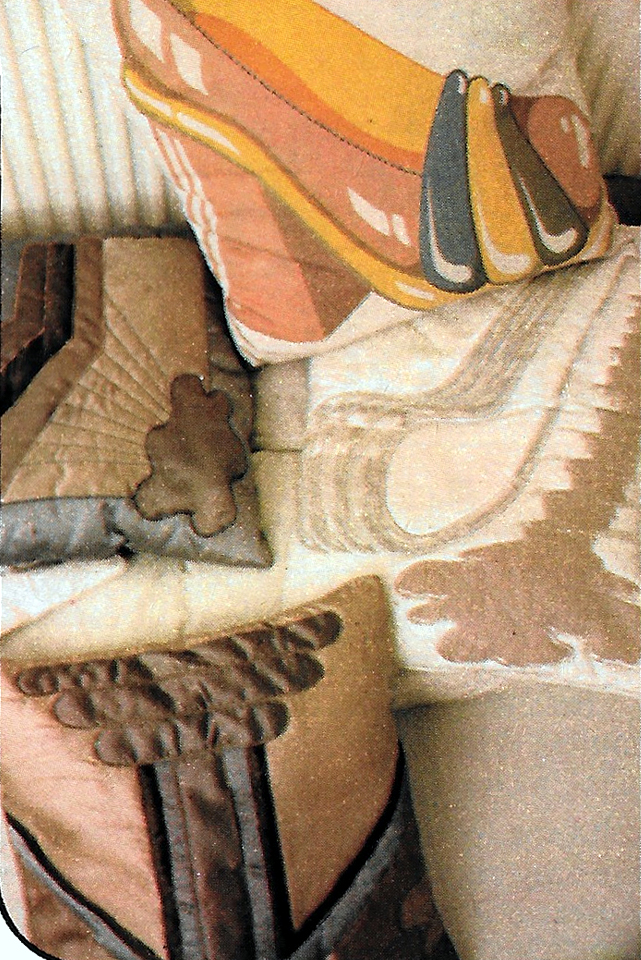 Incredible feature on legendary pop artist and architect Jon Wealleans and his textile designer wife Jane Hill who were heavily involved with the Mr Freedom shops and products.

Jon Weallans and Jane Hill are two ex-Royal College of Art students, both twenty-four. They were married in San Francisco six months ago, and they live and work in an Edwardian house in London’s Notting Hill Gate.

Both designers, Jane studied textile design at college, and Jon studied interior design; so, to put it simply, Jon designs the furniture, and Jane covers it. They don’t often work together but, whether working alone or together, both produce pretty off-beat stuff, as you can see from the photographs of their living-room.

Jane, who made the escalator blind, says her ideas come from magazines. 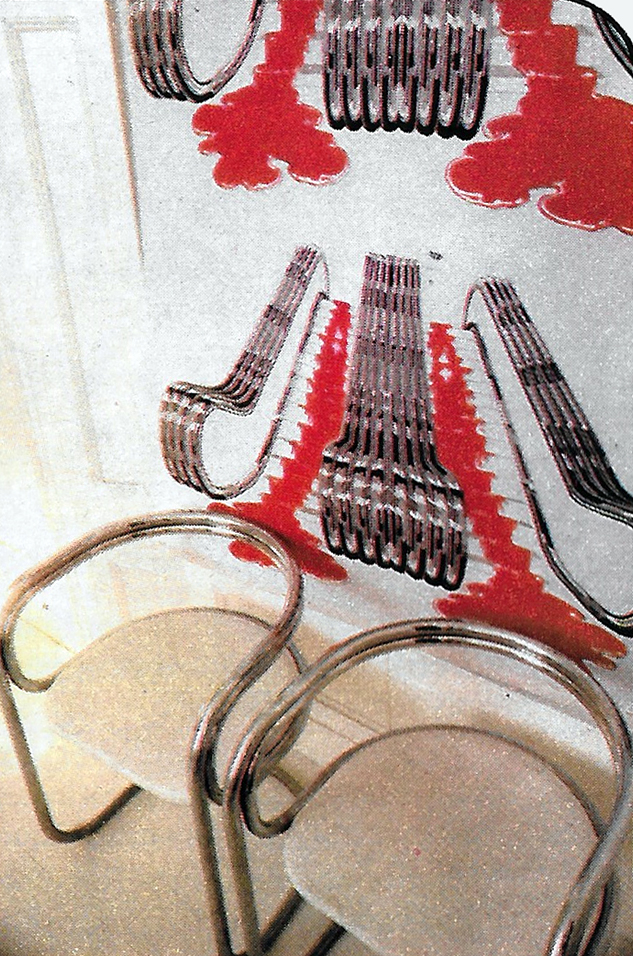 An unusual escalator roller blind, which has been silk-screen printed in red and black, on cotton.

“I’ve just got a huge pile of visual references. Suddenly I see a picture of something and think, I could use that, and start drawing. I’ve always been interested in escalators, anyway – I have recurring dreams about them! The red flowing down these could be blood or it could be ketchup. It’s not really supposed to be morbid. There may be submerged sinister implications, but they weren’t deliberate.” (The blind is to be produced as a poster by Gallery Five.)

Jon’s answer to it is: “It’s all about making a very strange juxtaposition of two things. An escalator is an object you can identify with, and there’s suddenly a strange ooze coming out of it. It’s sinister, but afterwards you can look at escalators in a new way.”

Jane is also responsible for the cushions. She used ‘Thirties’ motifs and giant shoes; silk-screened on to satin, then quilted and made up into cushions. She commented: “I suppose in the ‘Thirties, people said, ‘Why on earth paint a piece of newspaper and a dead fish?’ And perhaps the artist replied: ‘Because people haven’t looked at an old newspaper and a dead fish before.’

“It’s important, because I think a decorative thing usually ends up being around for quite a long time, and I don’t very much like the idea of doing things which you can’t look at, and afterwards think: ‘Ali, I didn’t see it quite like that before.’ ”

“We’re both designers, and that’s all we’re good at,” confeses Jon. “We have no other perks, this is how we make our bread. The people I respect most are the people who have come to terms with the fact that they are making a living, and that they are not arty dilettantes. They are the people who are really on the ball, and who can get up and do a bit of graphic design on their knee, whilst eating beans on toast, or whilst watching television.

“What you need in all forms of art is a sense of humour. I can’t stand people who get all heavy, and take themselves that seriously, be-cause I don’t think anybody should think like this unless they are in a fantastically serious cause.”

Jon was commissioned to design the new Mr. Freedom shop in Ken-sington, London, and it is for this that he designed the false teeth chair. It is made of PVC covered foam, and has a fake fur tongue—a masterpiece of upholstering by Felicity Youett. (It’s sold by Mr. Freedom for £160.)

A false teeth sofa, with a soft and life-like tongue for some idle lounging.

“The teeth may seem pretty funny,” he says, “but if you go and sit on the Underground in the rush hour and look at those people, they’re pretty funny. I mean, who’s the funniest? Maybe Mr. Freedom are the most honest funny people in Lon-don, because the people who wear their clothes look really happy. And, with my furniture, I’d like to give just a few people a bit of a buzz, by looking at it. I’d like them to think again.

“My ideas usually come in a functional way. I really did want a unit that could make up a bed, sofa or a room, which is what the jigsaw seats do.” (Each unit costs £30 from Mr. Freedom.) “It’s the most obvious thing really, because you can rearrange them to any shape. They are in candy-floss coloured, metallic PVC covered foam.

Intriguing foam-filled and interlocking jigsaw seats, can be pieced together or else used separately.

“The false teeth are a bit of a con, because they originally started out as a piece of pop, soft sculp-ture, and we only realised when we opened them, that you could make a seat. It is really a case of taking something perfectly normal and everyday, and blowing it up to giant proportions, so that people will look at it twice and think about the ordinary item again.

“It seems pointless to keep designing the same things. No one need ever design another chair; there are enough for the next fifty years, because there are guys around who have solved the problem completely. After a while, you get an optimum solution and I think Le Corbusier had the optimum solution for a chair in the ‘Thirties, so why carry on now doing Design Centre chain?”

The only furniture he didn’t design in their living-room, are the white plastic stacking chairs by Jo Colombo of Italy, which are sold in this country in Habitat, £11 each. The chrome dining chairs are sold at Habitat shops for £18 each. The floor is covered with white lino tiles, which you can buy in packets, and lay yourself.

They are working on their bedroom. A giant Orson Welles film-set bed, placed on fur-covered Busby Berkeley steps, is planned, and the room will be in navy, scarlet and silver. They are painting stars on the, ceiling and having a neon ‘hello’ sign on the wall. Jon’s designs are certainly different, but he’s not entirely devoted to the freaky. As he says, “I did the main branch of the Bank of England in Leeds, and they were the straightest people. You couldn’t get further away from Mr. Freedom if you tried.

“The acid test would be to do something like a home for the blind, because you couldn’t do anything visual, it would all have to be spot on, and really good. No colour, jokes or imagery. That would really sort out the sheep from the goats. Or if someone living in this road said, ‘Do my bedsitter for £10.’ Now that’s the sort of problem I’d really enjoy working on.”