Amazing 1950s ruched swimsuit by ‘Slix’.
Just a quickie post to inform you that I’ve just listed three gorgeous swimsuits over on eBay.

Because I don’t want any of you to miss out, I would just like to point out a few gems I have over on eBay at the moment. There’s John Bates, Janice Wainwright, Frank Usher, Mr Freedom, Horrockses, Miss Mouse….and those are only the labelled pieces. There are also some gorgeous little gems without designer attribution but with a whole lot of style and appeal. Please do go check them out, while I carry on with some new website listings….oh yeah, much MUCH more to come!! Keep ’em peeled….

Right lovely vintage people out there. I’m getting incredibly frustrated by the [now] three different mannequins I’ve ended up with on the website. I loved Odette, we all loved Odette, but Roxy is here to stay for now and I don’t necessarily have the energy to re-photograph everything on her. So I’m having something of a clearance sale over on eBay right now. Lots of website bits at reduced prices, so if there’s anything you’ve been keeping an eye on – then scoot on over there now and bid on it!!

Perhaps I’m a bit bonkers to be doing this, I’m really not a ‘sale’ kind of person, but I would much rather be out looking for exciting new stock than having to rephotograph existing listings. And I’m sure you would rather that as well. Take advantage while you can!

…here’s a heads up to a few fab pieces I’ve just listed over there. Brand spanking new ones too!!

and the also-quite-rare original Big Biba address book in all its art deco glory!

Oooh la la! But that’s not all, so head on over there to see what else there is….

Sorry, very bad Duran reference there. Just thought I’d direct anyone who hasn’t seen it, but who might be interested, to this stunning Art Deco jacket which is listed on eBay and finishes tomorrow night. It was on my website for a wee while, but wasn’t really getting the exposure it deserved so it’s priced to go on the ‘Bay. It’s had a bid, so it will be selling. So, last chance!!

It’s quite possibly unique, almost certainly one of the most beautiful pieces of fabric I’ve ever come across and definitely an immensely collectable (whilst still being wearable) piece of….well, art I suppose. 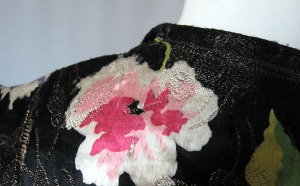 Veering a little off my normal and natural course with some more recent vintage on eBay at the moment, but I couldn’t resist! Firstly, some may find it heinous but I actually think it’s rather fab and a cut above the usual of this type…..

Next a little something for big-bow-lovers in this super cute little prom dress with pailettes all over the skirt!

And then there’s a seriously sexy sequined mini dress which is pretty much guaranteed to stop traffic.

To soothe your troubled Sixties and Seventies minds though, there’s also a rare Gerald McCann skirt suit and a lovely moss crepe cape top amongst other goodies.

(Perhaps that title will mean nothing to anyone other than British kids who grew up in the 80s….but I can’t get the theme tune out of my head now!)

As an ever hopeful platform-loving girl who wears approximately a 6.5 in UK sizing, I find I end up with an awful lot of size 6s in my closet. I can get them on, but the question is whether I can actually survive a night out in them. I love my platforms, I really do…..but honestly, it’s time for a clear-out.

So coming up on eBay tonight is the first wave of my grand shoe sale. I have more to come, but since I don’t often sell shoes I think I’m just going to wait and see before I go delving back in for more goodies.

The sizing misfits in amongst this lot are the Biba platforms which my lucky, lucky flatmate has tried on and despite her horror at the height of them (she’s not a seasoned platform gal like I) assures me they feel like her fairly standard UK size 4. The listings will have measurements so please check them against existing shoes you already own. And now for the shoe candy……

Mod-tastic peeptoe and cut-out boots (Courreges copies by Lotus)
poor loves need some tlc and some new insoles – but aren’t they styling???

Satin wedge seventies babies by ‘Frolics’
(though I find I have a hard time frolicking in wedges….)

and finally some very wearable black Seventies platforms by Maria Elena.
They’re a bit rough around the edges, but with a little tlc they’ll be fit for stomping around in once more!

Biba were spearheading the Seventies revival of all things antique, including the ‘lounge’ culture. Spectacular gowns and peignoir sets were made ostensibly for the bedroom but far too good to be restricted to it.

This incredible peignoir set of dress and dressing gown is made in a distinctively Victorian / Edwardian style, with voluminous amounts of fabric and lavish ruffled hems, necklines and sleeves. You can do some serious swishing in this set, believe me – the photos don’t even show just how much volume there is! 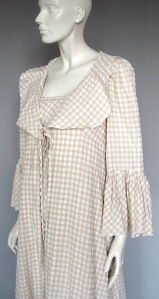 Fit for any drama queen and a very, VERY rare example of this type of extraordinary, idiosyncratic Biba lounging lifestyle.

Once upon a time, I happened across a Radley own-label dress with a print which screamed Celia Birtwell. It was very like her later, crazier prints you see on the later Ossie pieces. I was fascinated, and perplexed because it was definitely a later Radley piece with the ‘girly face’ label. But it was definitely Celia.

I wondered if it was a one-off. But now I’ve found this little beauty, which is exactly the same design of dress, with a totally different print – but also a very distinctly Celia one! I can only surmise that Birtwell remained contracted to Radley after her divorce from Ossie Clark and continued to create at least one collection under their label.

Printed sketchy flowers and squiggles cover the deep plum sheer chiffon of this delicious dress. The gathered waist, the draped faux-wrap bodice and the draped back from the fitted yoke give it a wonderful grecian goddess feel. I love the very subtle effect of the pale topstitching, and the sheerness without lining means you can be as audacious as you like – whether you wear a slip or undies is up to you! And that, is the influence of Ossie! 😉

£38 Starting bid over at eBay

BIBA
I always get very excited by Biba pieces which were featured in the catalogues of the late Sixties. Perhaps because Biba was often so ephemeral and fast-moving, and not always featured as heavily in magazines of the time as you might think, it’s lovely to see them in situ and be able to date them (and see the original prices!).

This lace blouse was originally part of an ensemble with a skirt (which could be long or short apparently) but clearly is extremely wearable on its own.

In the catalogue’s own description “Spider lace peplum suit. A close fitting waisted jacket with narrow sleeves, buttoning to a high Edwardian neck.” The full suit was £7 7s in 1969.

Starting bid of £45 over at eBay

But that ain’t all…..there’s also a delicious couture label Ossie Clark ensemble, a superb bohemian Janice Wainwright, a super sweet candy pink Jean Varon dress and some other lovely non-designer pieces. Please do go and check it out!