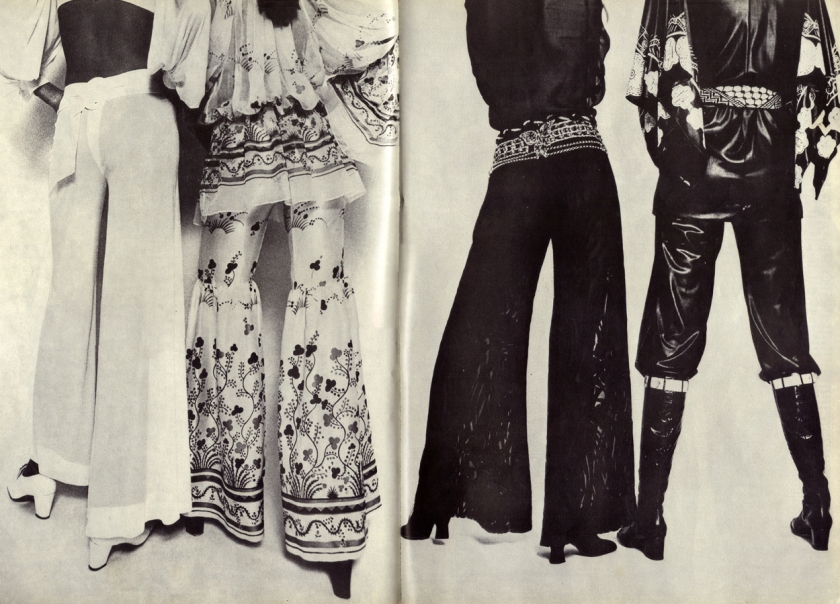 Everyone is tired of hearing that the mini skirt is on the way out.
Nearly as tired as when they heard it was on the way in.
These things in fashion die a very slow death,
but in this case one reason has been the lack of alternative.
Designers made too great a leap with the maxi,
and too indefinite a move with the midi.
After extremely short skirts,
something flapping around mid calves did feel extremely frumpish.
This was tied in with the fact that no boot manufacturers at
that time were making them with high enough heels,
essential with a longer skirt,
and it was very difficult to find feminine unclumpy
shoes which gave enough of a lift.
Now footwear is changing.
Boots are tall and beautifully fitting.
l-ligh-heeled shoes — very high — are pretty,
well proportioned and extremely flattering.
And so one branch of fashion may well be influencing another.
ln the end everything is a matter of proportions.
When skirts went up, heels came down.
The high stilettos we used to hobble around in so painfully,
not really that long ago,
looked far too tarty with hemlines halfway up the thigh and even
worse with trousers, especially tight ones.
Since most women feel their legs to be too short,
and the wearing of the heel as very necessary to a feeling of femininity,
this cancelled out the wearing of trousers for a very large number.
Until a short time ago trousers were being worn by,.
apart from men of course,
women who looked like men — that is, girls with no curves.
Lean hips. Long legs — in flat shoes.
Now for the first time comes the alternative to the mini skirt. Trousers.
That is, until hemlines decide exactly how far they will drop.
As drop they will.
Footwear has helped provide the solution.
It will comfort many to know that the models in the
pictures which follow, averaging 32″-35″ hips, still have
to choose, very carefully, shapes which suit them.
Their legs are long but still need the added inches that a high
heel gives them. Their shapes are slim, but female.
Still sometimes round enough to need the camouflage of a long jacket,
cardigan or tunic. They show that closely fitting
trousers can be sexier and will also make you look fatter.
They show that a small waist is made smaller by a high
cut rather than a hipster style.
Most of the trousers for evening lit well over the hips but flare out
in a very feminine, flattering way.
They are glittery, shiny, and see-through.
Beautiful in fact; better than ever before.

Alas, now that mini skirts are accepted just about everywhere.
we have to warn that trousers, for women that is, aren’t.
An appalling number of top London hotels
still hold fast to outdated rules about them.
Officially they are not allowed in, even to drink,
let alone to dine or to have lunch.
ln the Dorchester they can’t even have tea!
In the Mirabelle: Ofhcially, trousers are not admitted.
The question does not arise much at lunch—tirne
as there are never very many women there.
ln the evening the rule has now been relaxed and you
would be permitted to dine in trousers.
Talk of the Town: Certainly you may wear trousers.
Savoy: They now allow very dressy evening trousers in public rooms
but no daytime trousers at all.
Wearing them to private functions in private rooms
is left to the discretion of the organisers.
Dorchester: You would not be served anything
when wearing a trouser suit.
This applies to all public rooms,
but for banquets and other private functions it is up to the organisers.
Connaught: Officially not allowed at any time in the bar or restaurant,
but it is a decision left to the manager.
Carlton Tower: Trousers are not encouraged in the Rib or
Chelsea Rooms, but they are coming to accept them.
They prefer lunch-time trousers to evening ones.
Westbury: Trousers are not allowed in the bar or restaurant;
this applies to evenings too.
However, this rule, like others, is relaxed from time to time,
eg, when Brigitte Bardot arrives in trousers from the
airport – or Lord Snowdon arrives for dinner in a roll-neck shirt.
Hilton: Officially no trouser suits in the Roof Restaurant.
Unofficially you could get away with it if it’s
a very beautiful catsuit or something similar.
At private functions it depends on the organisers.
Ritz: No rule for the daytime, it just depends on the trousers!
Usually it is permitted to wear trousers
in the evening, but again it depends . . .
Claridge’s: Very strict,
definitely no trouser suits in the public rooms,
though they say you can wear what you like in private!
Crockford’s: They don’t object to them at all.
Coq d’Or: They much prefer to see a lady dressed as a lady.
During the day they prefer skirts
but don’t object to trousers in the evening at all.
White Tower: lf the woman looks elegant and well-dressed she is let in,
otherwise she may be told that the restaurant is full.
Brown’s: No objections at all for either day or evening
in either restaurant or bar provided the wearer looks neat and tidy.
Les Ambassadeurs: Don’t mind couture—cut or evening trouser suits,
but don’t like anything untidy like blue jeans.
Caprice: Quote from the reservations man:
‘l am sure we can have no objections.
women eat here in trousers all the time’

The eagle-eyed among you may have spotted the Ossie Clark ensemble which won Dress of the Year in 1969. For an item which won such a prestigious award, it’s always amazed me that I haven’t seen more contemporary images of it. I suppose it’s quite ‘out there’, even by late Sixties standards, but thankfully Molly Parkin was always pretty way out there.

If you can make your way through all the text, it’s a pretty impressive and important insight into the attitudes towards women in trousers in late Sixties Britain. It’s easy to forget how scandalous it could be, even in 1969 – a good four years after we first saw Emma Peel in John Bates’s trouser suit designs in The Avengers, for a woman to wear trousers. People obviously did it, you see enough fashion spreads to know that, but the list of swanky hotels and restaurants who still would refuse entry and service to a woman in trousers is quite extraordinary. 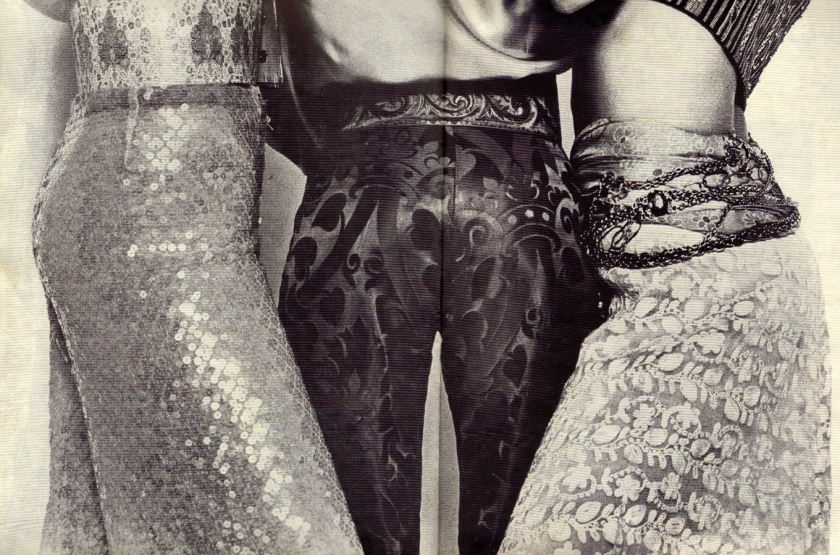