This is Linda Hayden, seventeen year old actress and friend of Richard Harris. Of her he’s said, “She looks absolutely lovely, she’s a wonderful girl.” Linda doesn’t altogether agree with him. She doesn’t think she looks absolutely lovely because she says her cheeks are too podgy. She is very partial to lager and lime, Cornish cream, butter and crusty fresh bread : But when she is working on a film like Baby Love or her latest, Satan’s Skin, her weight just falls off. Still, normally it’s a great battle to keep to her ideal seven and a half stone. When we met Linda, she told us that she had two ambitions: 1. To stop being cast as a nymphet in horror films. 2. To learn how to shade her face so it always looked slim. Linda has very little time to learn about makeup. When she was fifteen she starred in Baby Love, but was not allowed to go and see it. After that she had a series of sexy parts in Hammer films like Taste the Blood of Dracula. In her latest film with Charles Hanson and Piers Haggard there are all sorts of evil doings, Linda told us, “Hardly a moment went by without someone being impaled on a pitchfork, raped, or stabbed with shears in the back. I cut my foot to ribbons with the end of the fork first time I had to do it and was rushed off for a tetanus injection.” Linda, who lives at home with her parents and sister goes off food for about a week when she wants to look really super. She just lives on cheese and coffee. This way she can lose five pounds without trying. She was vague about future plans. She is in no rush to do another film and laughed at any idea of marriage. Richard Harris’s former wife, Elizabeth, and Rex Harrison are inseparable but Richard is cagey about marrying again and says, “Even Helen of Troy couldn’t drag me to the altar anyway Linda is too young and ambitious and I am too old and ambitious. I am going on forty!” With the help of a makeup artist from Eyelure, we show in step by step pictures how the skilful use of makeup can alter Linda’s (and your) features.

Shot 1—no makeup. Shot 2—Max Factor Pancake 085 was smoothed in with a dampened sponge to give an even base. Shot 3—Linda’s eyebrows were brushed upwards and outwards with a dampened mascara brush to give them a better shape. Foundation was blended well into the eyelids and then a light dusting of face powder was added with the sponge, to give a non-greasy finish. White Shadow Pearl used with water and stroked on gently with a brush, was used to highlight immediately under the eyebrow. Then Smokey Grey shadow used with water and carefully applied with a brush was used all over the lid, and brought round under the eye. A little white shadow pearl at the very roots of the eyelash made the eye appear more blended in. Top lashes were mascaraed from underneath with Max Factor’s black mascara. Finally feather light strokes of soft brown pencil were used to shape the brows. The lashes used were very natural– Eylure’s See Through Lash No. I in brown. They were put on carefully with tweezers, starting in the middle, then pressed gently into place. Next the bottom lashes were mascaraed from above. Black Short Trim Underlashes were used because bottom lashes tend to look lighter. These were also applied with tweezers. Shot 4—Shading was done with brushes for best effect. Eylure do twelve brushes for £6.6s. Using the Eylure Face Shaper Kit, the makeup artist put white highlighter on the cheekbone and plenty of brown shaker in the hollow of the cheek. This was done with upswept brush strokes and blended in so that it didn’t look just like a dirty smudge. Then more highlight was used under the shaper to bring out the lower jaw and finally dark shaper again was used along the jawline and underneath to give the chin more definition. Shot 5—A delicate tinge of blusher was blended in just below the cheekbone. With some good brushwork Linda’s cheekbones were re-discovered. Shot 6.—The final look with Estee Lauder’s lipstick Walnut, glossed up with vaseline.

Tunic top with hood from Way-In.

Scanned from Diana For Girls, 1976

Like Loading...
I’m very honoured to have been tagged in a top ten award by the gorgeous Smashingbird. I am supposed to tell you my top ten beauty products but, considering I only really use Lush these days, I fear it may be a little dull. I’m not even including shower gels in this list, because I alternate between Olive Branch, Grass and Flying Fox (depending on my mood or my location, since the latter two are my boyfriend’s at the moment…) Still, here goes…
1.) Karma perfume. It took me years to find ‘my’ perfume. I still love Anna Sui Sui Love, but it always disappeared after about half an hour and was never available as an eau de parfum. Then I fell in love with Lush and their Karma Kream (a delicious moisturiser). Turned out that Karma was also a proper perfume, and so finally I had found my perfect one. I don’t like conventional ‘girly’ smells. Flower scents make me feel queasy, always so synthetic and sickly. I liked the fruity smells of the Anna Sui, but it had no depth. I liked musks and patchouli, but they were always too one-note for me. Then I met Karma, and its combination of patchouli and orange was too perfect for me. I’m doubling this up with both Karma Kream and Karma Komba (the solid shampoo). The whole Karma range, basically! 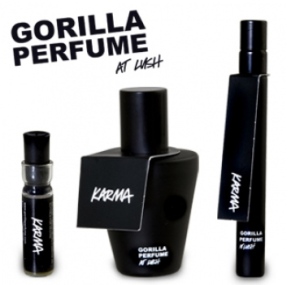 2.) M.A.C Liquidlast eyeliner. Don’t get me wrong, nothing can beat Rimmel’s most basic liquid liner for sheer precision, but its lack of longevity was starting to get to me. Then I witnessed my friend Lisa rubbing her wonderfully liner-ed eyes furiously and yet they did not smudge. Was it magic, I asked? No, it was M.A.C and I decided to splurge (£14). It takes a while to master, especially if you’re used to the fine and smooth Rimmel, but was well worth it. It really does take quite a beating; you can pretty much rub or swim/cry to your heart’s content and it won’t shift. But will easily come off with a very gentle remover.

3.) Lush Jackie Oates colour supplement. Obviously, Lush couldn’t bear the thought that they didn’t have a foothold in my make-up bag as well, so they decided to introduce some foundations to their range. And Jackie Oates (which does, weirdly and amazingly, smell of oats) is the palest pale foundation I’ve ever found. I’ve never found such a perfect match for my skin before. It’s a little lighter in consistency than my old L’Oreal favourite, but you can build it up if you like – and it’s perfectly formulated for mixing with moisturiser.

4.) Beauty UK eyeshadow palette. I have two of these variations, and really do want them all. The colours are very pigmented (almost at the level of old Biba eyeshadows – which is wonderful to find, because the Bibas are hard to come by) and they last longer than more expensive ones I’ve tried. They’re such a bargain as well, you can afford some more expensive but subtle shadows with which to blend them. Or just go for full-on New Romantic/psychedelic extreme looks. 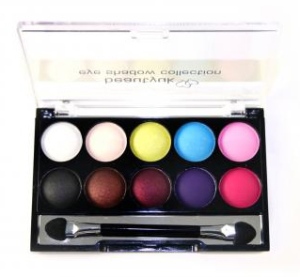 5.) Elnett hairspray. Speaks for itself. All others pale into comparison.
6.) Lush Buffy body scrub. No need for a moisturiser after your shower (so perfect for lazy mares like me!). Will leave you with the loveliest bum, and works nicely on that dry/bumpy upper arm problem area.

7.) Boots No. 7 Instant Radiance Concealer. £13.50. I used to use Touche Eclat, but with the advent of the Boots £5 voucher offers I decided to try the No. 7 version. Well, I now prefer it and it’s a good bit cheaper. Thanks Boots! Thoots… 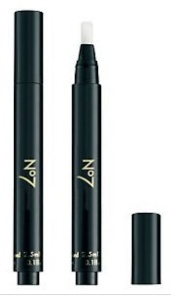 8.) Tresemme conditioners. (Price varies) My hair is so temperamental, I have to change shampoos and conditioners on a regular basis. This said, I nearly always come back to Tresemme conditioners. I decant them into small-size Lush bottles because they’re always such huge bottles (which makes them value for money as well). They don’t smell OTT, they do the job without leaving residue and they’re usually on special offers in Boots or Superdrug too. Hurrah!

10.) Lush Dark Angels. Amazing cleanser, my favourite from the wide range at Lush. You do look rather like a coal miner when you’re using it, and you need to be careful to clear up the residue, but it’s perfect for my variable skin. I use it in combination with the most basic Simple moisturiser because I have a tendency towards break-outs; the Dark Angels deals with those and the moisturiser replenishes what Dark Angels takes out (without nasty perfumes etc).

I always hate trying to tag people, especially since most people have probably already been tagged, so feel free to take it and do it yourself! I’m always interested to hear new tips and recommendations…

I did it! I left the house with a modest amount of backcombing last night, albeit kept in place with a couple of clips – but it’s certainly progress!!

In case anyone didn’t see the lovely Miss Senti’s advice on my post further down, re. Drew Barrymore, here it is for anyone who, like me, may be struggling with the idea of leaving the house with backcombing in place and being unable to control it. I’m lucky enough that I will have the lady herself here to help me soon enough, so for everyone else…..

* always backcomb the hair neatly in thin sections and then ease the sections together with a tail comb so that the overall teasing stays together.

* if you have long hair pin it back before you go out and take it down again when you go indoors. Usually perfectionist 60s girls curl their hair under and pin it so that you get a gentle curl under effect when it’s been in a while instead of a messy line where the hair has been put in a ponytail.

* get a decent hairspray which will hold after a thin layer of spray. If you have to spray half the bottle on your hair you’ve got the wrong hairspray. Choose one with added shine otherwise your hair will end up looking like plastic.

* wear a headscarf! Choose something unbelievably glamorous of course. 😉

Or if you were very lucky, you’d be a stewardess and have one of these things specifically designed by Pucci to keep your fab hairdo neat on the walk from the terminal to the plane: 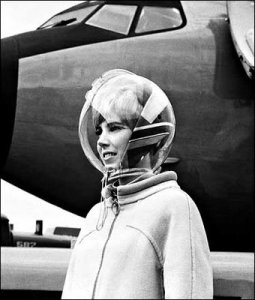