This advert from 1974 just makes me want the stripy boots, never mind painting my boots just one bright colour. It also always makes me think of the delicious Doug Reynholm’s homemade suit in the last episode of The IT Crowd; a very fine way to occupy the days before a trial. 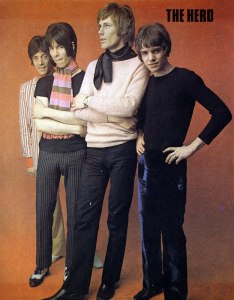 I think the Boyfriend 1969 annual might as well have been called the ‘Miss Peelpants Guide to How Men Should Dress’. Here are The Herd and Amen Corner, rocking the stripes and ruffles respectively. 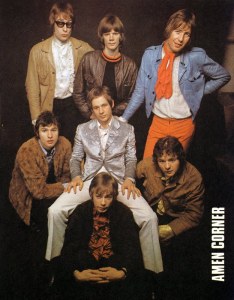 I’m very chuffed to have put in an appearance in Cision’s Top 10 UK Vintage Clothing Blogs, and in such esteemed company as well. Very nice to get recognition from such a site, even if I don’t quite understand how I ended up there! Thanks Cision! Thision.

(That’s for for any Look Around You fans out there….)

Oh no! Major oversight. I never finished scanning pictures from the Boyfriend annual 1969! Naughty me…. Since it’s a bit of an unofficial menswear week on the blog, here’s the gorgeous Simon Dupree and the Big Sound. So. Many. Stripes. Can’t. Cope. Swoon. 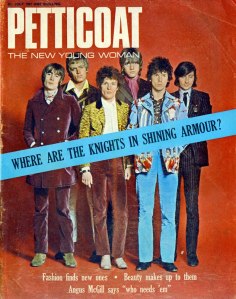 Ahhhhh. Men. So few know how to dress these days. I’m lucky that, more recently, I have been spending time with a gentleman who definitely knows how to dress. If you’d asked me a few years back, to describe how I would like my ideal man to dress…..well, it would be pretty much spot on. But a few years ago, it would also have felt like a very impossible dream.

For some reason, the odd odd-man would come along and would want me to ‘re-style’ them. And then, for some reason, they would fail to listen to a damn word I said. The rest lived in t-shirts and jeans. Sigh. Anyway, you should never try to ‘change’ someone. I just wish they taught this kind of stuff to boys in school. Or that I lived in the Sixties.

Anyway, I bought this copy of Petticoat from July 1967 the other day and was having severe fits of menswear-lust. The cover boys are all ‘English Boy’ models, the agency famously linked with those Quorumites in the late Sixties King’s Road scene, but I doubt any of them would be considered model-standard these days. However, they are instantly raised to godlike status simply because of the way they are suited and booted.

I also noted with amusement that the far left chappy is wearing a coat/jacket remarkably similar to my favourite (and now, inevitably, very shabby) burgundy velvet autumn coat. Confirming the fact that, I think, I often aspire to look like a male dandy when autumn hits, rather than a lady.

I have a confession to make; I’m afraid I go weak at the knees for guys in stripes. Not any old stripey thing, I hasten to add, but nicely tailored Sixties or Seventies numbers (and a bit of early Eighties stripey shirt action, Duran-style). I’m not sure where it came from, or why it has such a strange effect on me, but I’m not sure I really care. I’m just enjoying the view….. 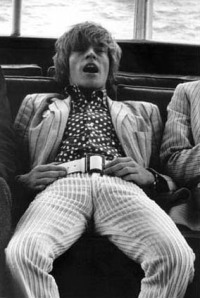 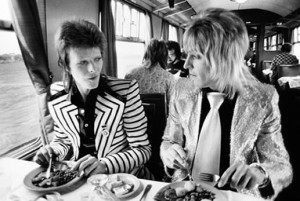 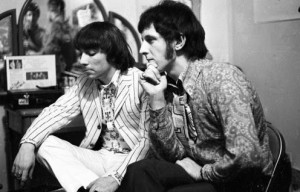 (sensory overload….Pattie in Ossie! George in stripes!! Where to look, where to look….) 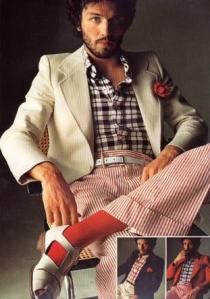