It’s been quite a while since I last posted about goodies over at Vintage-a-Peel. This blog has moved slightly away from its original intention as a communication and promotional tool for the website, which is fine by me because I genuinely love what it has become. Also, the Facebook page for Vintage-a-Peel, and Twitter, has become the fastest method for me to communicate with customers. But I realised that I’ve listed some incredible pieces recently which blog viewers might be interested in, and which they might have missed. So here they are; Biba, Ossie, John Bates, Fiorucci (incredibly rare late 1960s jeans), London Mob, Paraphernalia, Janice Wainwright, and that’s just the big names. Plenty more to be found over on that there website of mine… 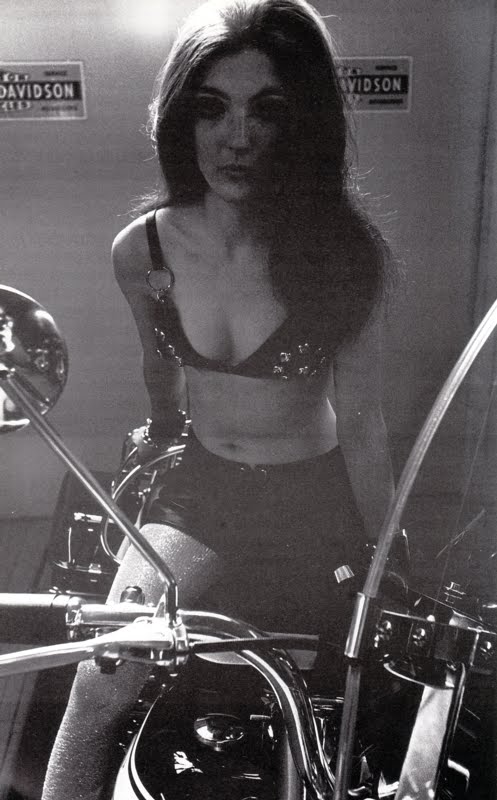 In the late ’60s, the rock hall replaced the discotheque as as the prime area for innovative fashion display. “In fashion terms a Fillmore East opening night deserves as much coverage as the Philharmonic Galanosed Galas,” claimed the Village Voice shortly after the rock auditorium opened in March 1968. “It’s a scene-making pageant whether they’re seeing Lenny at Lincoln Center or Jimi at the Fillmore.” In 1968, Bill Graham…tied together the pageantry in the audience with the fireworks on stage when he organized a mini fashion happening during an interval in the evening’s mixed bill. Unheralded, Barbara Mott, wife of designer Michael Mott, zoomed up the center aisle of the rock palace on an enormous Harley Davidson. Dressed in Mott’s black leather bra top and miniskirt pegged with hobnail studs, she tore up a ramp to the stage and parked her vehicle to the accompaniment of a cannonade of cheers from the Fillmore’s audience.

Image and text from Radical Rags by Joel Lobenthal

But I can’t stop working. Apologies for the mixed bag of listings, we’re still straddling two seasons at the moment (fashion-wise) so I’m trying to keep it light but trans-seasonal. This is harder than you might think. I’m also working on Autumn-orientated listings which will be coming towards the end of the month in preparation for a luscious September (fingers crossed). I might sneak the odd incredible designer piece on the block before then though, so keep your eyes peeled for that.

But what am I talking about? I’ve got a few amazing pieces just listed now, including Jeff Banks, Louis Caring, Paraphernalia and Sarah Whitworth.

“why is stuart maconie presenting style on trial?”

Why indeed dear reader, why indeed. I’ve asked myself the same question, many times.

Has anyone else in the UK been following the programme? The Fifties episode was an absolute car crash of an hour (no offence to Kerry Taylor who is lovely, and knows her stuff. But David Sassoon? That over-excited blonde woman??) They clearly ran out of things to talk about roughly 20 minutes into the programme, and then simply wittered on about Paris, Paris, Paris. London got a hard enough time, but at least it got a mention. But America? Only your style icons got a mention, none of your designers. Where was McCardell? Where was Galanos? Honestly, it’s the most poorly researched piece of fluffy nonsense I’ve ever seen.

Then the Sixties one was only really interesting because of Mr Bates. They [frustratingly] skirted around the mini issue, admitting only that he was doing the shortest, and Mary Quant’s name only got a tactful silence from Bates even when the others were waxing lyrical. Although I did get my chance to have a good giggle when they were discussing the Parisian designers doing the ‘space age’ look, only to have JB murmur ever-so-politely, and I’m paraphrasing slightly here, “Well, I did it first”.

I did wonder why he wasn’t sitting in the centre of the two ladies, as had happened on the previous two shows for the male contingent of the panel. Then I noticed that it would have meant having Ms. Quant’s beeg heed right behind him and in shot every time the camera was on him. That illicited a smile from me as well.

But I certainly learned nothing of any note. Except two things from JB.

1. Mr Fish designed the frilly dress and trousers Mick Jagger wore in 1969 (like many, I suspect, I was under the misapprehension that this was an Ossie).

2. I should never, under any circumstances, wear an Afghan coat in the presence of Mr Bates. Not that I actually own one, or aspire to own one, but it’s a good thing to know.

Again they also spectacularly failed to mention any of the iconic American designers. Gernreich wasn’t mentioned, neither was the Paraphernalia boutique….they simply dismissed America as being massively behind London and Paris and seemingly worthless of any comment. Now I’m very much a British-orientated vintage fashionista, but I’d much sooner have a Gernreich/Paraphernalia piece than a Cardin/Rabanne/Courreges piece. Perhaps that’s strange, but I find their approach more interesting.