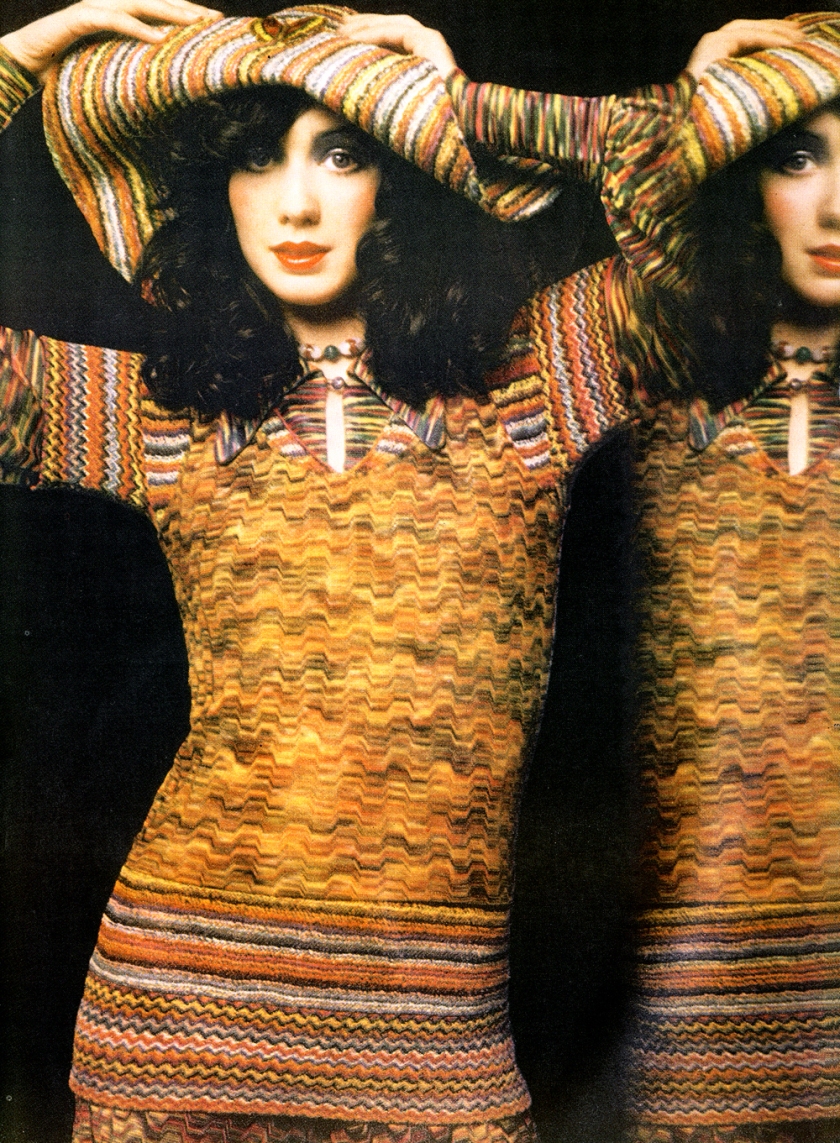 Clothes by Missoni. Butterflies and beads from The Purple Shop.

Ottavio and Rosita Missoni are to Italian knit as Gucci is to leather. Using inspiration from original an unexpected quarters – a piece of antique porcelain, a fragment of embroidery, a picture painted by someone they then employ in their factory and train to use their knitting machines – together they produce the most beautiful knits in ravishing colours, extraordinary patterns and perfect shapes. 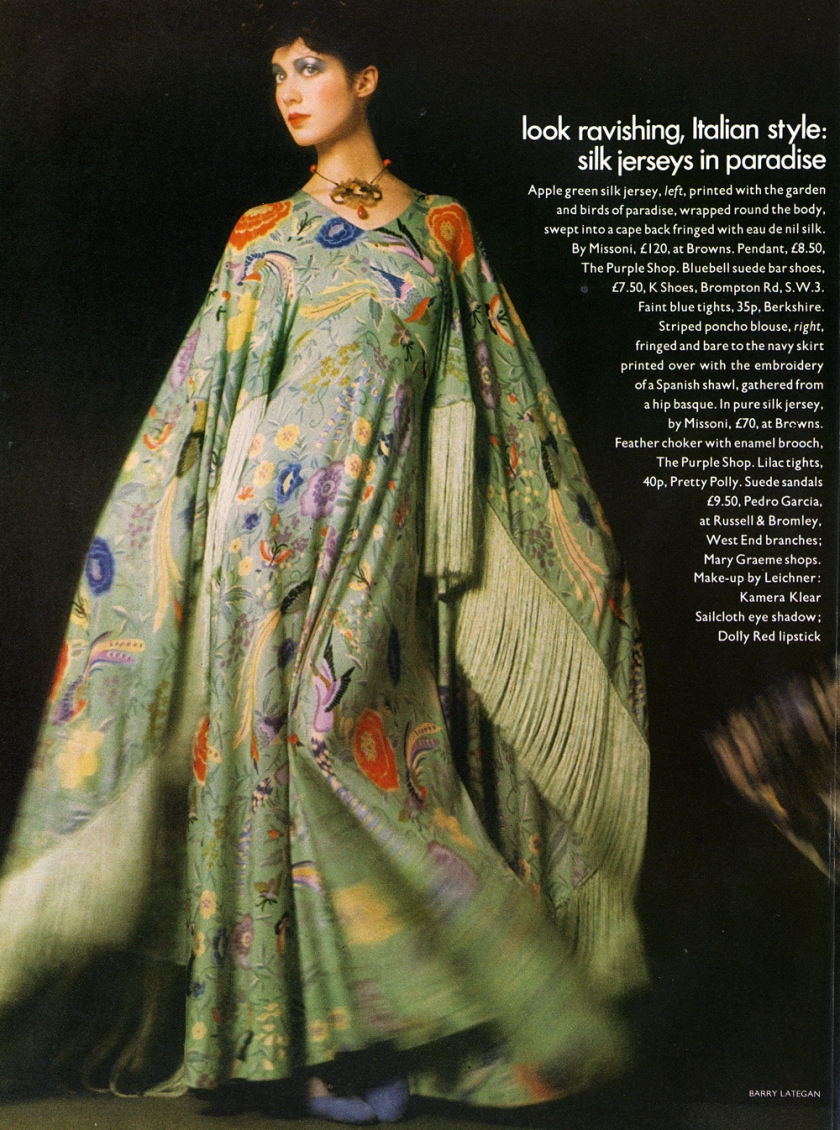 Clothes by Missoni. Pendant from The Purple Shop. Shoes from K Shoes. 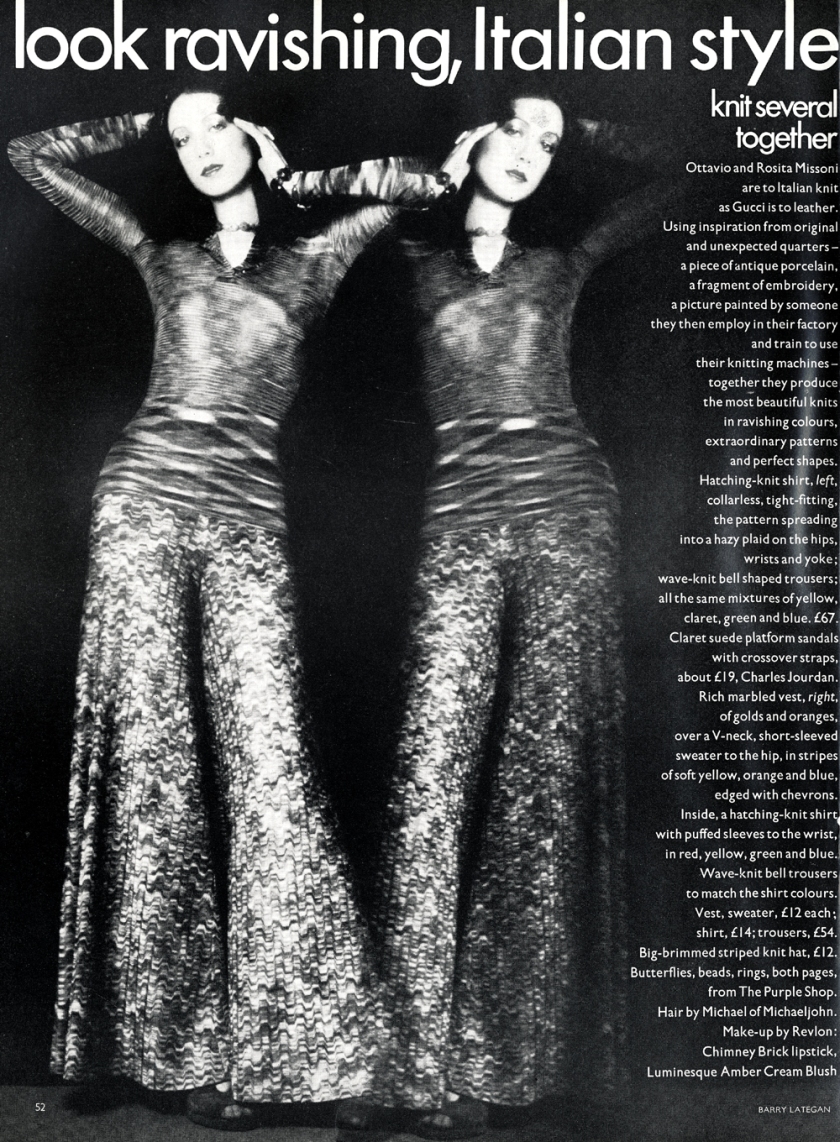 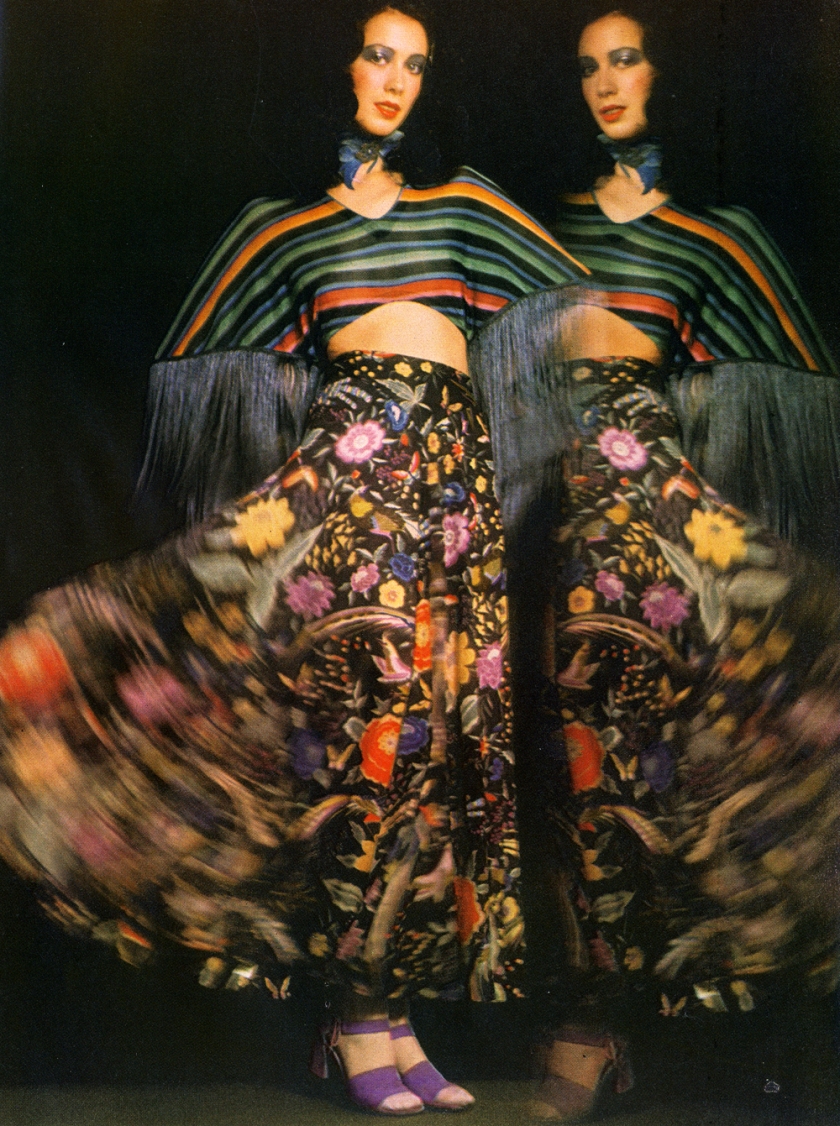 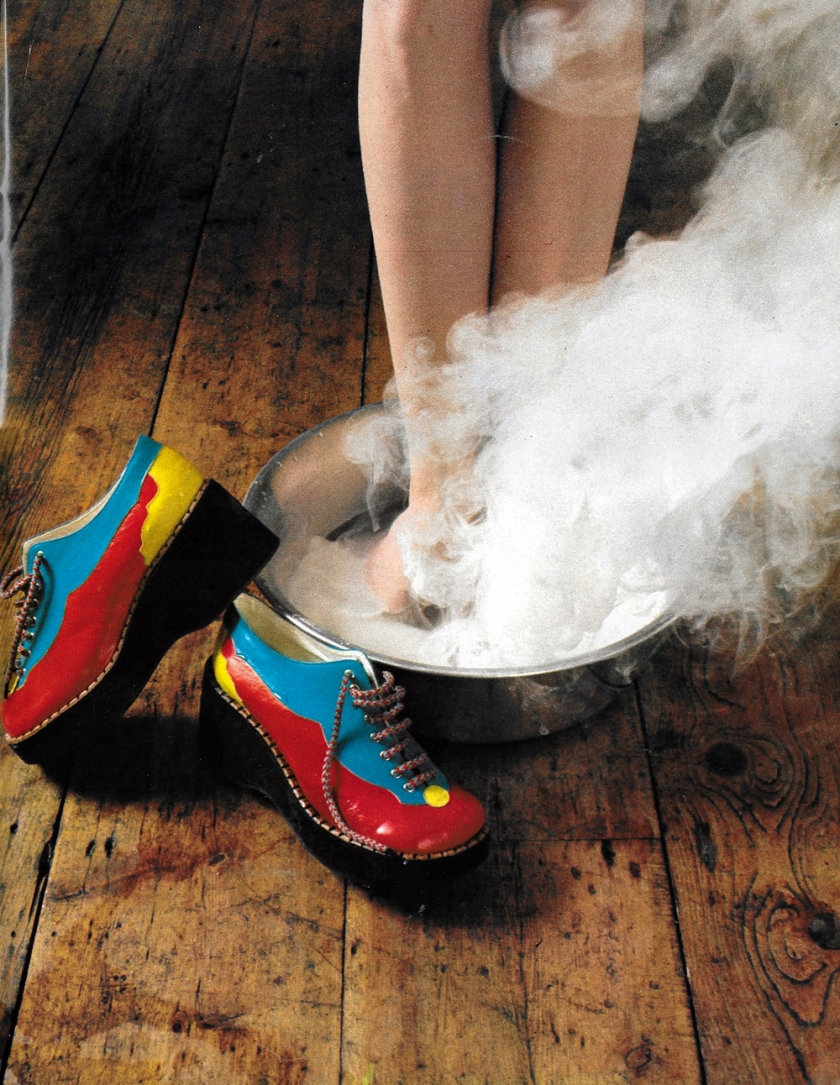 We threw in the line and fished out some of the best and most original shoes that are in the shops this spring. It may not be an ideal catch for a real angler, but then it depends what you’re fishing for, doesn’t it? 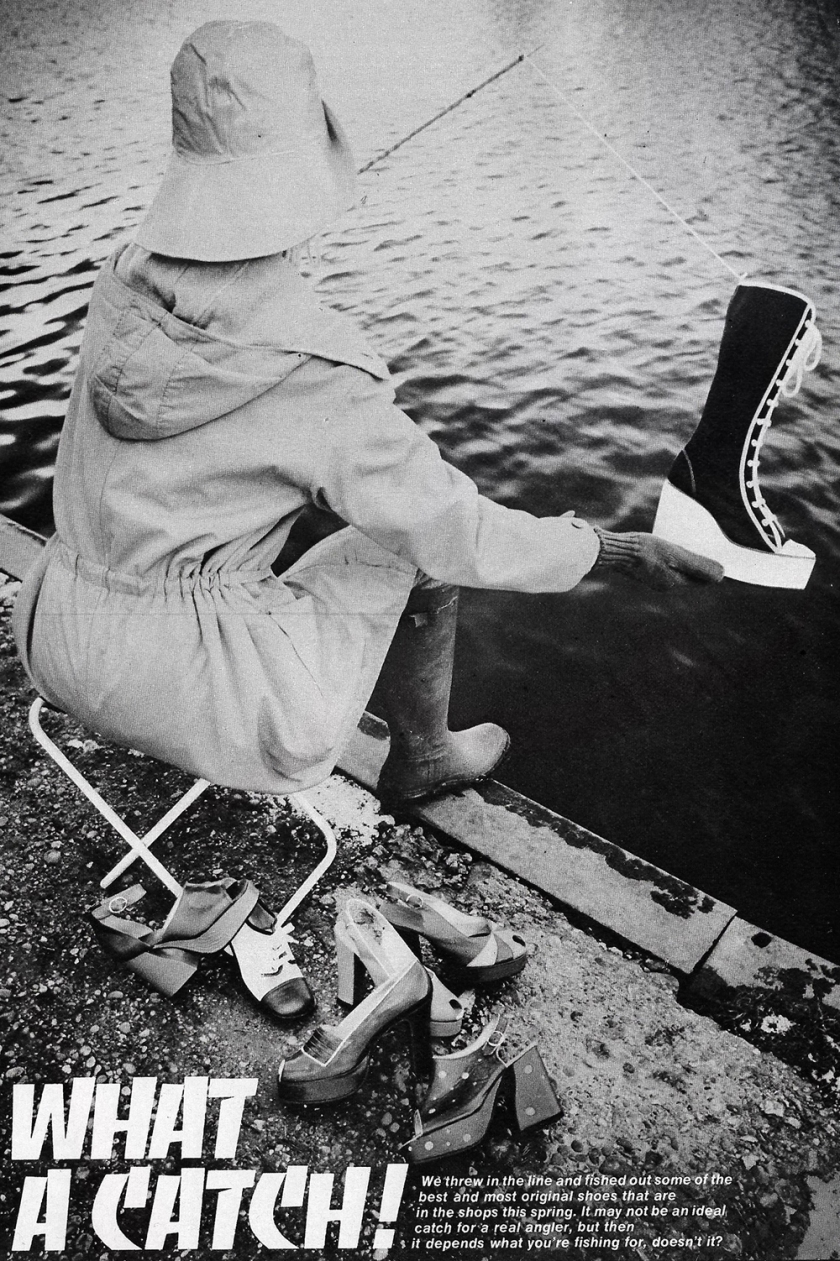 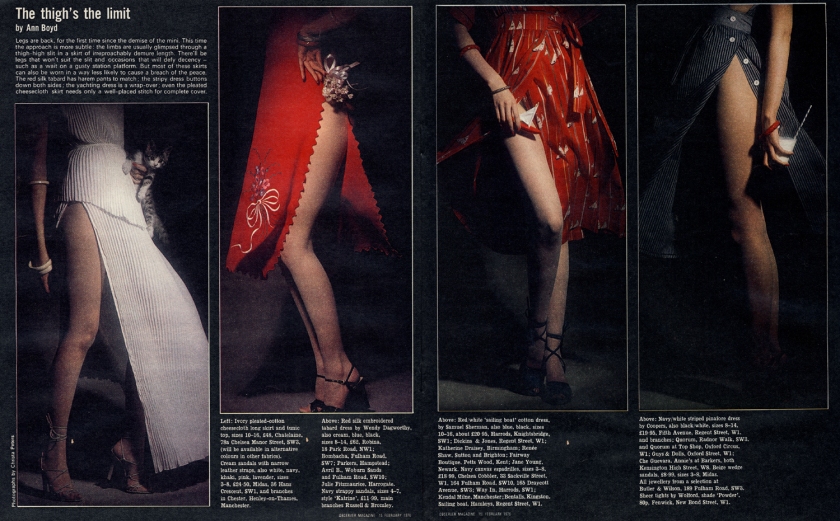 Scanned by Miss Peelpants from The Observer Magazine, 15th February 1976. 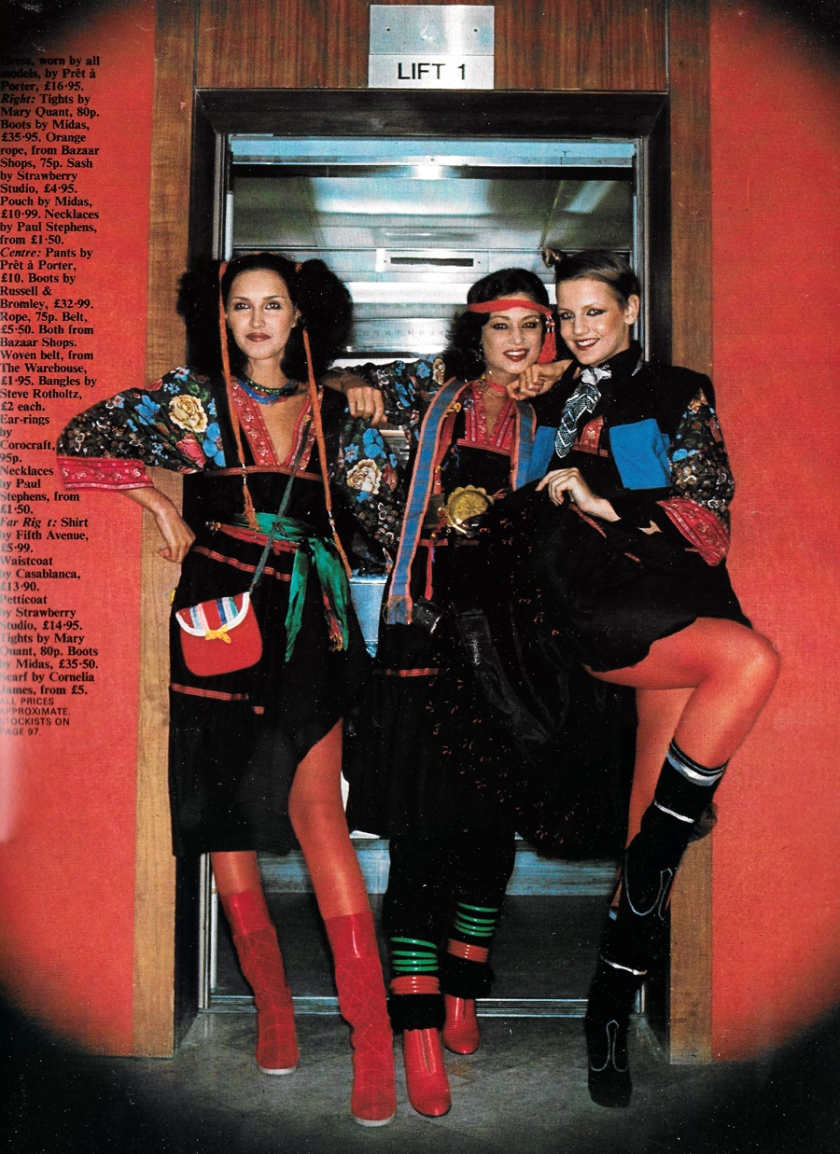 Ever been to a party in a not very exclusive dress and had that feeling that someone else is bound to be wearing the same thing? Or, maybe, you simply can’t afford more than one dress for the party season. Here are some smart ideas on how to ring the changes with just one number and be the belle of the ball every single time.

An early shoot by legendary Australian photographer Robyn Beeche, who would later make her name capturing the alternative scene in London in the early 1980s and who sadly died earlier this year. Beeche is largely known for her documentation of catwalk shows and Alternative Miss World events, as well as experimental portraiture, so it’s interesting to see a more conventional studio/fashion set-up from her at the beginning of her career. 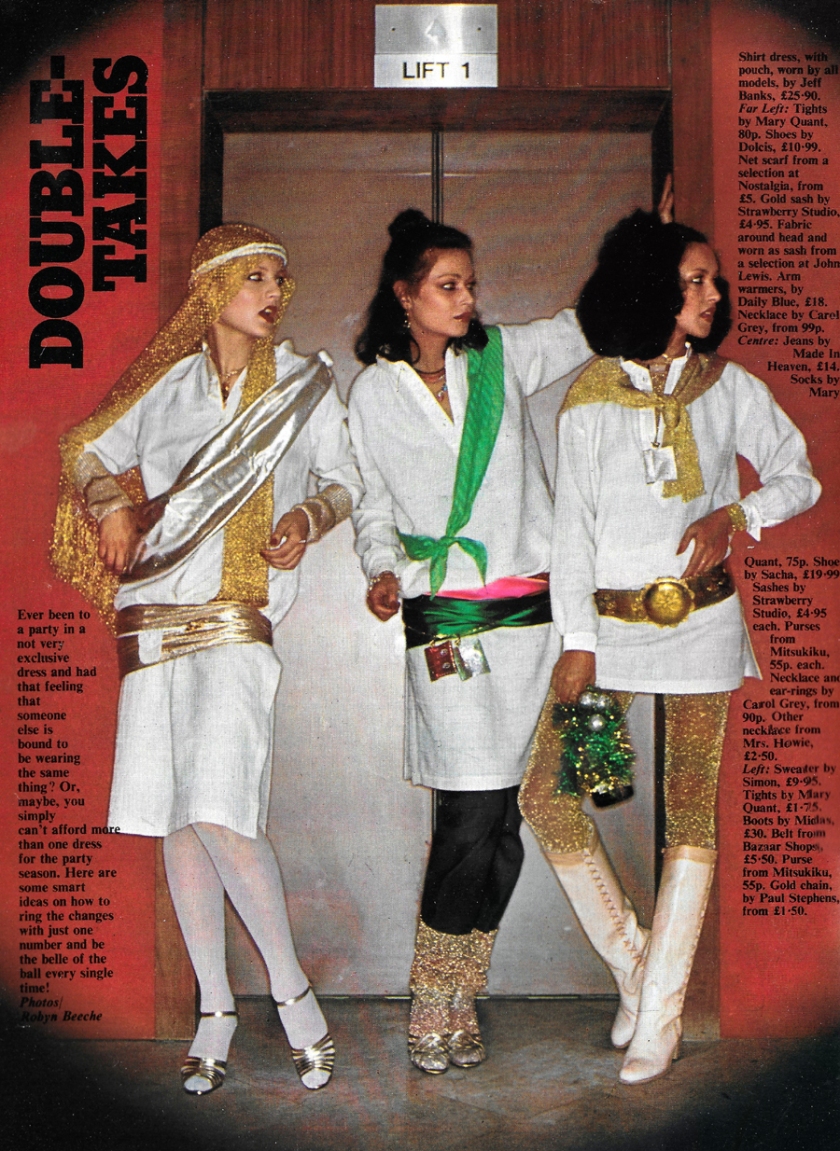 Shirt dress, worn by all models, by Jeff Banks. Far left: Tights by Mary Quant. Shoes by Dolcis. Net scarf from Nostalgia. Gold sash by Strawberry Studio. Fabric around head and worn as sash from John Lewis. Centre: Jeans by Made in Heaven. Shoes by Sacha. Sashes by Strawberry Studio. Purses from Mitsukiku. Right: Sweater by Simon. Boots by Midas. Belt from Bazaar Shops.