The world of pop artists Simon and Marijke is indeed strange—their philosophy is to spread the influence of art over every aspect of civilized society, to produce a world throbbing with colour, light and beautiful things—but are we ready for them and their way of life? Will they make it, or will they disappear into the realms of history? Jeremy Pascall visited them to find out!

Officially the street nameplate says “Montague Square”. Unofficially it says “George Harrison is the best Beatle” in felt-tip pen. Just up the road Patti Harrison’s orange and yellow mini is parked. Beneath the sun-hot pavement of the quiet London square is a cool basement area. Set into the wall is a blue-painted door with gold stars scattered across it. A small sign says “Love, special delivery!”

Behind the door is a large, calm flat, at the centre of which is a big, open room, bright with rainbow paintings, fragrant with incense and flowers, loud with music, and alive with happy, talking, laughing people.

The Cream with their instruments, painted by Simon and Marijke.

Here two young Dutch painters, Simon and Marijke, hold court. Their boon companions are Barry and Josje. Their courtiers include the Beatles, Mick Jagger, Graham Nash, the Cream and the rest of London’s most beautiful people.

But this is not just a court, it is a painter’s power-house, a beauty factory. Simon, Marijke, Josje and Barry are part of a new generation of artists. Pop artists who are using pop music and stars and fashion to bring their work before us. If you’ve ever seen the Cream, opened the “Sgt. Pepper” cover, or bought the latest Hollies’ album you’ll have seen their work. And you’ll be seeing a lot more of it in the future.

Simon (pronounced Simone) Posthuma is twenty-eight. He was born the year that war broke out, and remembers the Germans being kind to him. “I turned them on”, he said and smiled. This is Simon’s mission, to turn everyone on to beauty and colour.

The son of a policeman (he admits to this with an ironic chuckle; his later life has shown that he and the police don’t always see eye to eye), Simon was an early drop-out, leaving school because “we didn’t under-stand each other”. He then went through every conceivable job. For a time he was an art student, “but they threw me out because they said I had no talent!”

Despite this set-back he continued to paint. “I’ve always painted, experimented, progressed, tried to find what I want to say.” At first his work was conventional landscapes and portraits, but he soon evolved his own highly individual (and now much copied) style of brilliant rainbow colours and patterns.

Four years ago the gently rebellious artist met Marijke (pronounced Marracca) Koger, than a commercial, but not very happy, artist working in an advertising agency. They clicked in every way and started creating happenings with the help of their growing circle of friends consisting of musicians, writers and artists.

Between them Simon and Marijke really stirred up Amsterdam. “We did some crazy, beautiful things, man,” Simon said in his soft, Dutch accent. “We organised evening happenings when we took over a house, and had music and dancing and action painting. One day we went out into the street and painted it gold. Crazy!”

Simon and Marijke were joined in their “rainbow circle” by Josje (pronounced Yosha) Leeger. Josje, an old school friend of Marijke, was already established as a designer in Holland, and her clothes reflect the beautifully bizarre, freely fanciful ideas of the group. The clothes are made of different coloured fabrics and materials. Like styled patchwork quilts and up-dated gypsy costumes, jesters’ motley and troubadours’ shreds and patches.

And so they were three—Simon, Marijke and Josje. They had good things going for them in Amsterdam — a boutique and exhibitions — but they wanted to get out and so Simon and Marijke went to Morocco and Greece and then decided that London was for them.

But at first London wasn’t sure if they were right for it! They weren’t readily accepted. “We got very annoyed about it at first, but then we got to know the people at ‘Granny Takes A Trip’, and through them we met hip P.R. man Barry Finch, who was looking for someone to design the programme for the Saville Theatre.”

Simon and Marijke came, he saw, they conquered, and that was the start! They designed the programme cover for the Saville, started meeting the most influential people in pop, fell under the patronage of the Beatles and never looked back.

Barry became manager of the romantic duo. The Beatles asked them to submit designs for their “Sgt. Pepper” cover. They did the full job, including a fearsome cut-out mask, but only the inner sleeve design was used.

Simon, Marijke, Josje and Barry have created their own little world, a prototype for what they want us all to have. It’s a sprawling, open flat, centred around a long hallway and communal room. Most of the business of living is carried on in this room, where visitors are made welcome. Unlike the classic picture of an artist’s home, the apartment is remarkably clean and tidy.

In the main room, be-decked with samples of their work, Simon and Marijke hold court. A record player in the corner drones Ravi Shankar, “a present from George”. Marijke hands round sweet little Indian cakes—”A present from Ravi”. Somehow the tiny community seems utterly cut off from the bustle of London and it is no surprise when Mick, Marianne and Patti wander in to savour the tranquillity.

Surrounded by the things and the people they love, they gently, persuasively expound their philosophy, and outline their plans.

It is a philosophy based on love. “The essence is love. Love will grow, spread until the whole world is turned on to it. Love will not die. Everybody must turn on.

“There are people who don’t understand and walk away, but the next day they find out a new part of what is happening. To them it appears that it’s all happening at once, but in fact it’s the culmination of years. People react to us; in Paris they shouted rude words at us and we smiled back, but it didn’t happen in London. Anyway we’re in a different society, we mix with people who think like us, we stay in our headquarters all the time, work all the time.

“What is the ultimate? Paradise, living for each other. No dirty cities. We will change back to country communities where money won’t be necessary, we’ll work for each other. Who’ll do all the work? Computers. Eventually computers will show we don’t need computers!

“The old leaders are dying. Soon there will be new leaders. No, not leaders — spiritual mentors. This is the divine plan,” said Simon.

The philosophy sounds muddled and naive but it’s spoken in all sincerity. Simon speaks wonderingly of Eastern mystics who can perform miracles, produce castles out of the air. Charmingly childlike, but they have exciting plans afoot.

There will soon be an exhibition of Simon’s work, followed by the opening of a boutique and a film or theatre venture.

Boutique isn’t quite the word. The shop will be more of an environment. Simon and Marijke think that pop, fashion, art and design have been too separate in the past. They want to bring them all together under one roof. It would be nice to see people walking around in their fabulous clothes, hanging their beautiful paintings on the walls (posters will soon be available) and accepting their philosophy. But are we ready for it yet?

All colour, fun, love, beauty. Gold streets! Why not? That’s how it feels to be one of the beautiful people!

Some wonderful photos of The Fool which I hadn’t seen before. Interesting to read about their plans for their boutique (the-here-unnamed Apple Boutique) which would open only a couple of months after this was published and closed six months later. 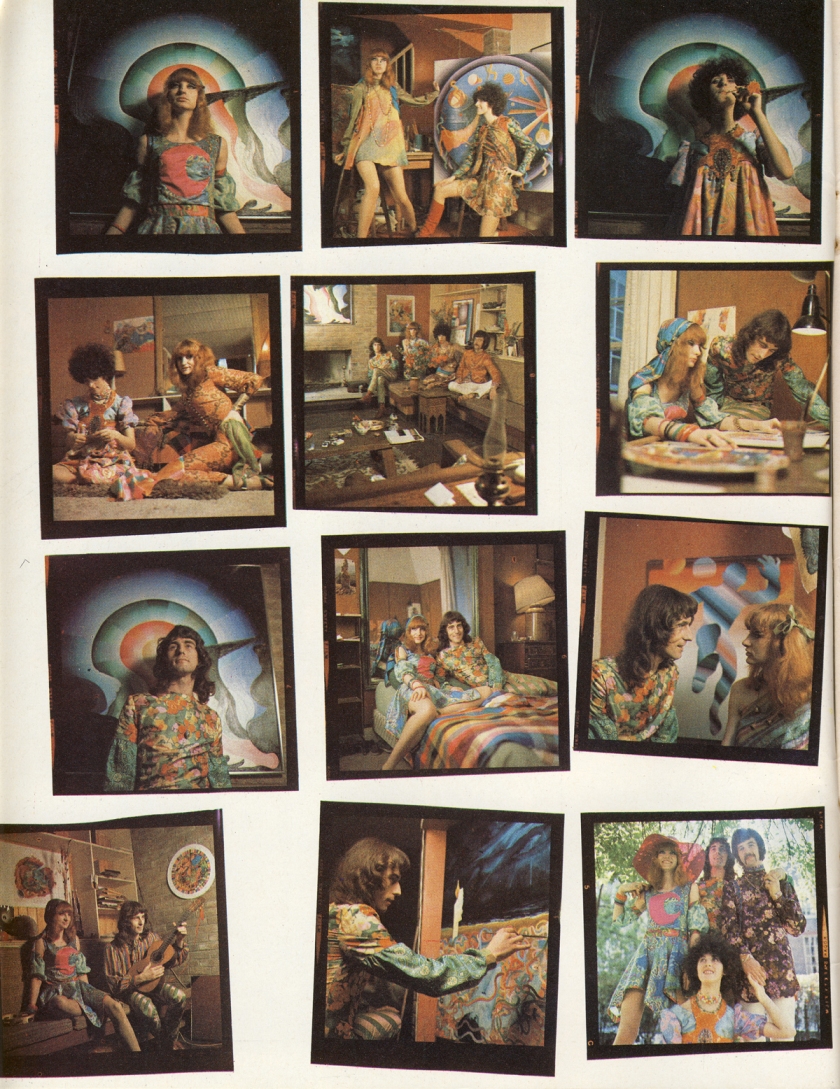 Featuring iconic model Charlotte Martin (who had romances with Eric Clapton, George Harrison and Jimmy Page). and some of the sweetest knits I’ve ever seen.

One of my favourite Petticoat spreads, from September 1971, which I haven’t scanned in full before (why? I have no idea….). It was photographed at the Hard Rock Cafe in London, and published a mere three months after it opened (June 1971). The Hard Rock was a different beast back then, the memorabilia which would later become such a huge part of its identity was a later addition and quite haphazardly acquired to begin with.

Isaac Tigrett (later to marry Maureen Starkey, whom he would often introduce as “My most authentic piece of rock and roll memorabilia.”) and Peter Morton opened their American-style diner in an old Rolls Royce dealership on Park Lane. It became an instant hit with their musician and music-loving friends. They could come along, post-gig, for a hit of fast food, good company and a relaxed atmosphere. The decor developed from eclectic Americana into iconic music memorabilia, as various musicians donated their old instruments and clothes to their beloved Hard Rock diner.

‘So Clapton got to be friends with the proprietors and asked them to save him a regular table, put up a brass plaque or something. And the young proprietors said, “Why don’t we put up your guitar?” They all had a chuckle, and he handed over a guitar, and they slapped it on the wall.

No one thought much more about it. Until a week later, when another guitar arrived (a Gibson Les Paul, by the way). With it was a note from Pete Townshend of The Who which read: “Mine’s as good as his. Love, Pete.” ‘

This photoshoot is a rare insight into how the Hard Rock would have looked when it first opened and before it acquired its now legendary status and worldwide domination.

Tartan pinny with button sides by Foale and Tuffin. Vest with red trim and heart buttons by Dranella. Boots by Sacha. 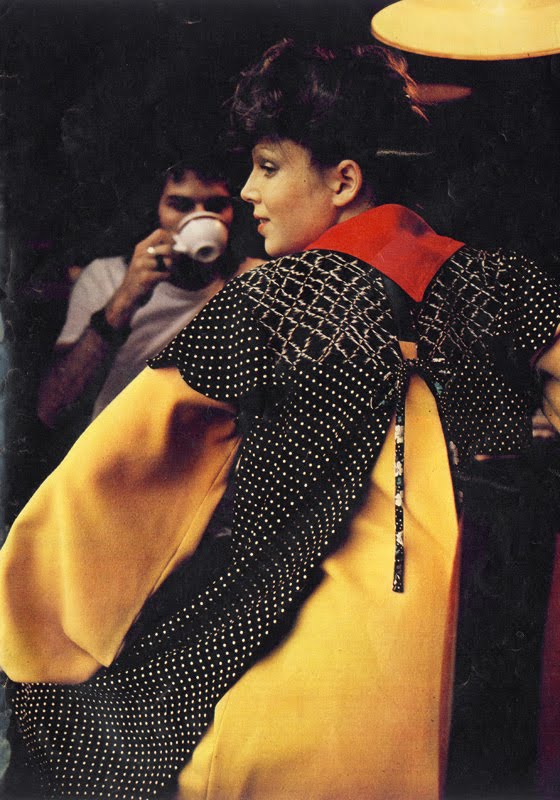