They break boring beauty traditions and riot lip colours go on eyes, eye colours go on lips. Upside down- Quite contrary. And why not? Make-up was getting so dreary. We just stuck to the rules and slicked warm colours—pink, amber, soft orange—on our mouths, and cool colours—grey, green, blue, brown—on our eyes. Till now. Till the anarchists started this new groove. Now things are happening. Putting on a face isn’t a daily chore to be done as quickly as possible. Make-up is something to enjoy. It’s art. Total fun. Total fantasy. After all, painting on warm mobile skin is so much more exciting than .cold fiat paper or canvas. Come, join the anarchy party and experiment with colour. Sit down this evening in front of a well-lit mirror, not the telly, and design surprise eyes.

Alice Pollock (top) says she would like to be invisible (can’t think why) and her favourite perfume is Chanel No. 5. She has tried every hair colour under the sun, including green, but she’s glad it’s her own shade now—”At least I know who I am when I wake up.” Every morning she washes it in the bath with Boots Herbal Shampoo, 2s. 11d. On her eye-lids she paints Leichner’s Ivory Stick No. 5, 5s. 3d., and then an arc of pale green under the brow and round along the cheek-bone. Her lip-colour is a mixture of the same Leichner stick and Christian Dior’s Sepia 61 lipstick, 15s.

Moon (centre left, whose real name is Constance Mullens and who was nicknamed after a South African cartoon character called Moon Mullens) wears Mary Quant’s Citrus Jeepers Peepers, 18s. 7d., on her eye-lids and a purple Caran D’ache water crayon all round the eyes to tone with her hair which is cleverly coloured mauve and butterscotch by Erik and styled by Herta at Vidal Sassoon, Grosvenor House; 01-629 2463. Her favourite perfume is jasmin and, asked what the most vital beauty product is, she said, “a razor.”

Gala Mitchell (centre right) is a beautifully original actress. You may have seen her before in Ken Russell’s television film about the Pre-Raphaelites. Her most treasured beauty product is lipstick. Here she’s wearing Biba’s purple lip-tint, 5s., with black liner round her mouth. She uses more of Revlon’s Natural Wonder Lid Liners, 17s. 6d., to paint intriguing black spots across part of her face to symbolise a veil, and then twists a string of blue curls, tinted by Erik, amongst her copper hair which she keeps in place with two ’40s tortoiseshell hair-combs.

Kari Ann Moller (bottom left) says she wants to look like the wicked witch in fairy tales, yet she loves cosy perfumes like Apple Blossom and Lily of the Valley (Coty’s Muguet des Bois Creamy Skin Parfum, 17s. 6d.), and she couldn’t live without Nivea. “I found an old purple crayon in my boyfriend’s car—he’s a painter—so I’m wearing purple with a dab of lipstick and Leichner silver sparklers on my eyes today, plus tart red lipstick by Elizabeth Arden.” Her soft ginger wig is by Ricci Burns, 151 Kings Rd., S.W.3. 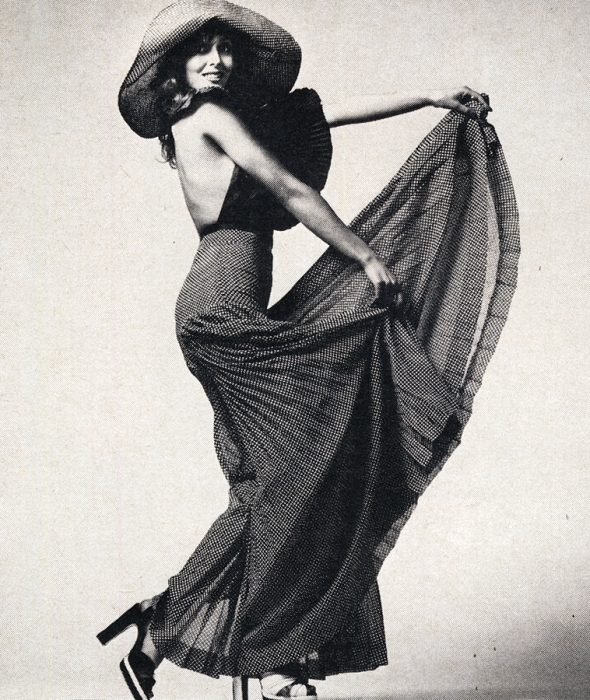 Christopher McDonnell must dream in black and white, and all his dreams must star Ginger Rogers and Rita Hayworth. Because, when it comes to designing clothes, this twenty-eight year old ex-Royal College of Art designer is the very spirit of Hollywood: his clothes have backless bodices, necklines to the navel and skirts that grip the bottom and then flare in Busby Berkley pleats. His model girls, smiling jammily through their bright lips, false eyelashes and heaving curls, snap along on platform soles. One of today’s top stars, Anouk Aimée, is his favourite customer. Here, model Kari-Ann wears black taffeta top and pleated dotted culottes by Christopher McDonnell, £35. Hat by George Malyard. Shoes by Terry de Havilland, exclusive to Marrian McDonnell.

Scanned by Miss Peelpants from Cosmopolitan, May 1972.

Photographed by Tim Street-Porter. Scanned by Miss Peelpants from 19, April 1969 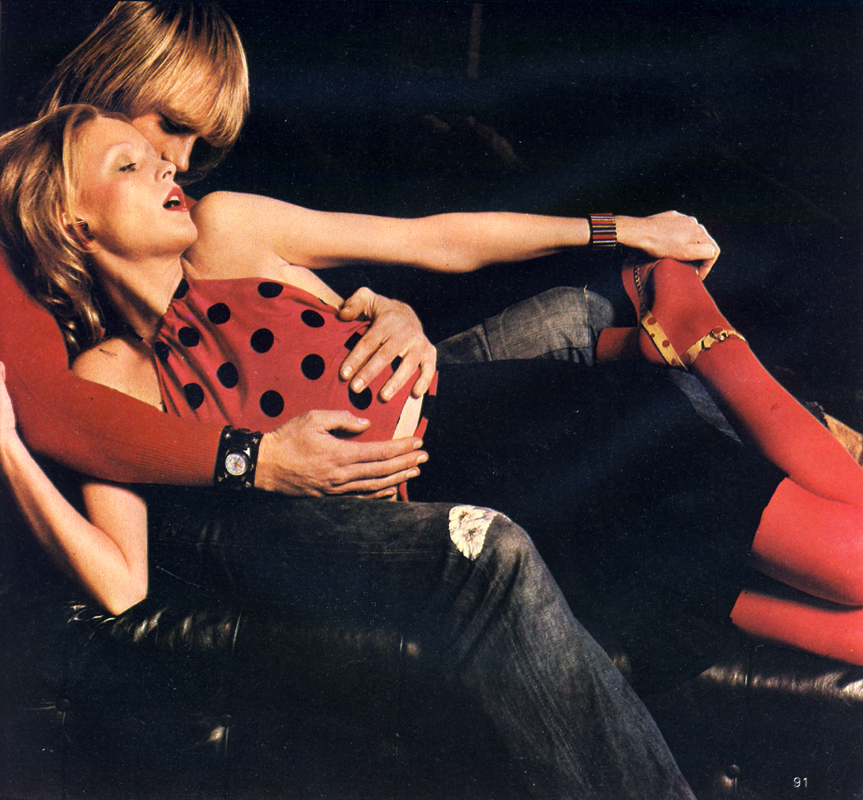 Barbara wears halter top and pleated skirt by Mary Quant, £23 for the rigout, and shoes by Chelsea Cobbler. He wears intarsia sweater by Ballantyne.

Nice girls are turning a cold shoulder on some of the best looking men around. Perfectly enchanting girls, like Twiggy, who flashes her famous shoulder blades at Christopher Gable through her sleeveless, backless The Boy Friend costumes. And who can forget Lauren Bacall and lngrid Bergman acting with their backs turned on Bogie in all those Late Late Show films. Now you can make some of the best exit lines in the backless—and fairly frontless—cIothes previewed here. lt’s clear that fashion is on the side of the female female in clothes that show off a nice warm back and allow plenty of MANoeuvring room. Putting the Back-to-Basics through their paces in many of the pictures are Barbara Trentham and Gary Myers, a couple of Cosmo people to watch. Blonde, brainy Barbara with the 1,000-watt smile will soon be seen in her first film, opposite Shirley MacLaine. called, if you can believe it, The Possession of Joel Delaney, and Aussie Gary is tall, dark and one of television’s busiest tough guys. Together they show that a cold shoulder never turned a good man off… 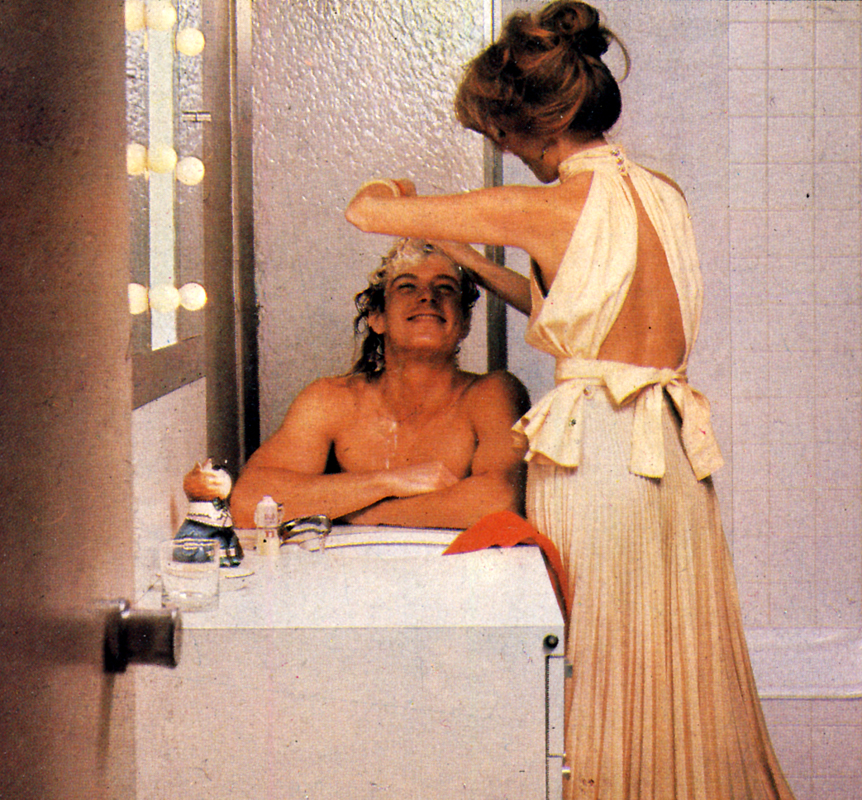 Paulene Stone in a robe from Browns, £20

Because he’s Bryan Ferry and because he always seems to soothe me when I’m frazzled. I also love that Kari-Ann Muller is the girl in this video, seeing as how she’s the original Roxy Girl (note the original album cover framed on the wall behind her)… Schmoooooooth.

There seems to be some sort of immense cock-up, re. your new album. Those wags at the record company appear to have placed something called ‘Kate Moss’ on the front cover. How strange! How careless! Perhaps they need a little reminder of what a Roxy cover girl should really be like. 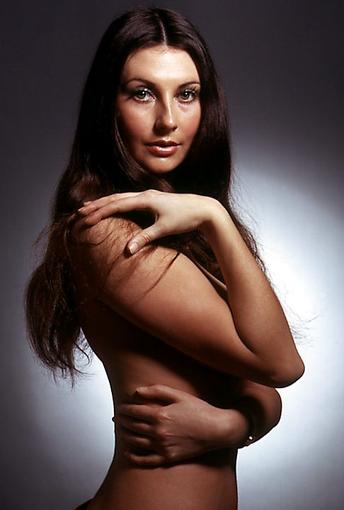 How kind of you to take the blame for them, by saying it was all your own idea. You’re such a gentleman. Although a little foolish, for who could believe that the BryanGod would ever deem Kate Moss to be a suitable Roxy girl?

You see, the big problem is that I wish to purchase your [surely] superb new piece of work, but I have an allergic reaction to Moss and cannot, therefore, get within a mile of it without breaking out in a rash. What a dilemma! What a pickle!

I look forward to purchasing from you again in the future, when sanity has been restored.